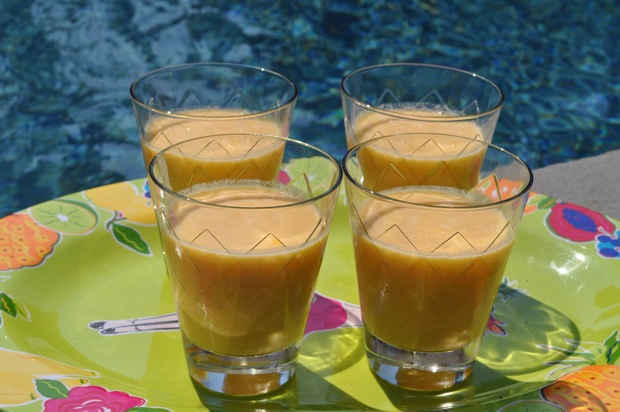 This was the first real clunker…although it was chiefly due to a less-than-ripe banana. Ben scavenged the ingredients by himself at the farmer’s market, and I knew as soon as I saw green-tipped bananas come out of the bag that the result wasn’t going to be particularly scrumptious. I had planned to try to find the ripest ‘nanner on the underside of the bunch, but while I was still dicing the mango, Ben snatched probably the greenest one from the top, peeled it and dropped it into the blender, which already had all the other ingredients in it. So we whipped it up, knowing it wasn’t going to be particularly delish.

The smoothie was nice and creamy and frosty, but the taste of unripe banana was overwhelming. And really yucky. (Yummiest recent banana? Shared while walking in the wrong direction down Broadway on a steamy summer night.) This was an excellent lesson for the boyz in the importance of using the freshest, highest-quality ingredients whenever possible. The silver lining was that Ben scored some unbelievable local clover honey that tastes absolutely nothing like the processed stuff from the supermarket.