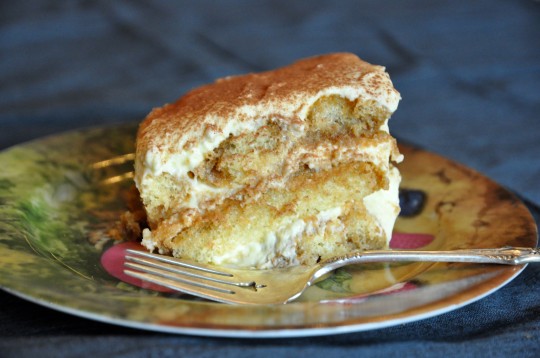 Tiramisu, the classic Italian dessert featuring creamy, sweet mascarpone cheese and lady fingers dipped in spiked espresso, is my twins’ favorite comfort food dessert. They order it anywhere it’s on the menu, and often have opinionated discussions on the merits of each particular tiramisu recipe. For a while, they’ve wanted to try making it at home, and have pored over dozens of tiramisu recipes to find one that sounded good.

What they didn’t know until recently is that when they were much younger (back in the days when they though it was called “Tirami Soup,”) I was the tiramisu queen. I used to throw them together for dinner parties, much to the swooning admiration of my appreciative guests, who had usually eaten it only in restaurants. My tiramisu recipe came from a late ’80s/early ’90s cookbook highlighting recipes from popular Rhode Island eateries, and it included the tiramisu from Adesso, a beloved, long-time family favorite in Providence (which closed several years ago but has now reopened under the same ownership in a different location). With the twins’ dessert quest in mind, I hunted through all my books and recipes, but I just could not seem to put my hands on the recipe for Adesso’s tiramisu.

Then to the rescue came my husband, David, and my sister. David cut right to the chase: he picked up the phone and called the restaurant! The owner remembered the family, and happily shared the recipe right out of the kitchen cookbook — in restaurant proportions to serve 24! The twins and I cut the recipe down for a home kitchen and made some adjustments for taste. The next day, I recounted the story for my sister, who remembered that she actually had my original tiramisu recipe. What she sent me was very close to the recipe the twins and I had developed.

According to my twins, who are something of experts at this point, this is hands-down the best tiramisu. It’s three layers of fluffy ladyfingers moistened with rummy espresso, separated by light yet delectably creamy sweetened mascarpone cheese. It’s all topped with a dusting of unsweetened cocoa powder, which perfectly complements the luscious coffee flavor. What could be bad about that?

So without further ado, I’m thrilled to share the long-admired, much enjoyed tiramisu recipe that has been proclaimed the yummiest in the land by a couple of cute guys who are in the know.

Inspired by Adesso on the Hill in Providence, RI

2. In an electric mixer, beat egg yolks and sugar until they are pale yellow. Add mascarpone and continue to beat until combined.

4. Dip a ladyfinger into the espresso mixture, quickly turning to dip other side as well, about 1-2 seconds per side. You want the ladyfinger to be nice and moist, but not completely saturated and soggy. (As you dip more ladyfingers and the rum-espresso mixture starts to decrease, you’ll likely need to soak each side slightly longer to get the same effect.) Transfer ladyfinger to a 9″ x 12″ x 2″ baking dish (or similar size — the pan should be tall enough to make 3 layers.) Repeat with more ladyfingers and arrange in bottom of dish, trimming as needed to fit snugly. Spread 1/3 of the mascarpone mixture evenly over bottom layer of ladyfingers. Repeat with two more layers, alternating ladyfingers and mascarpone.

5. Cover with plastic wrap and chill for at least 6 hours.

6. Before serving, uncover and sprinkle 1-2 teaspoons of unsweetened cocoa powder through a fine-mesh sieve all over the top layer of mascarpone.