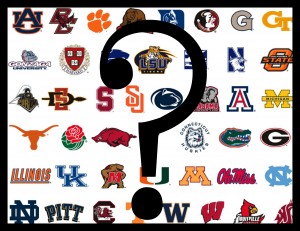 “Where has he heard from?”

“Does he have some good choices?”

“Has he decided where he’s going yet?”

It’s late March, and everyone has the same set of questions for me these days. Some folks are dying of curiosity about where my kid is headed, while others are simply fascinated by the whole process in general, ostensibly to get a sneak peek for when it’s their kid’s turn.

Although I’m under a strict news embargo about specific college acceptances until Ben makes his final choice in a few weeks, regular decisions have indeed been trickling in, some with ample warning, and some, BOOM! “Guess what, AP World class…I just got into my 17th choice school!”

And believe it or not, 17th choice isn’t even the bottom of the barrel when you’ve applied to 20 schools. Yes, 20. Yes, that’s an awful lot. Yes, I made fun of people whose kids applied to 20 schools. No, it’s not typical, far as I can tell. No, it wasn’t the original intention. It started out as a solid 13, got a little out of control due to a bout of panicked paranoia within hours of his early decision rejection, and in the name of not looking back and having regrets, it ballooned to 20.

Having heard from exactly half the schools so far, he’s already hit for the cycle: accepted, denied, deferred, waitlisted. There’ve been surprises along the way. Surprises about when decisions pop up. Surprises about some of the actual decisions, in both directions. Surprises about merit aid—a.k.a. temptation money. Honestly didn’t know it existed in the first place, so having it offered a few times now has been a super-nice surprise! And surprises about the full-court press you get from schools who apparently really, really want you. Think drunken stud following you around a bar just before last call.

So how different is the process from back in the day?

Time was, you bolted home from school each afternoon in late March/early April and anxiously checked the mailbox to see if there was a letter from any of the places you had mailed off your applications to months before. (I still have all five acceptance letters and one rejection—ironically from the same place that denied Ben for early decision. That’s twice those dumbasses passed up utter awesomeness!) Perhaps later that night you dialed up your grandmother and your BFF on your curly-corded touchtone phone to tell them who you heard from. Or maybe you even waited til the next day at school to share your news.

Today, the process is not nearly so civilized. Actually, it borders on vomit-inducing. Sure, there are still a handful of schools (Ben has three on his list) that mail their decisions. In paper envelopes. Through the U.S. mail. But instead of the letter just showing up whenever it shows up, you can go on sites like College Confidential, where there are posts by fellow applicants who’ve done detailed analyses of what day the college mailed their decisions each year for, let’s say, the last seven years. And based on that, they start prognosticating. And anticipating. And freaking out when they don’t get a letter on the day that everyone has blindly and witlessly presumed.

But that’s nothing compared with the regurgitation factor for online decisions. There are a few ways these virtual decisions roll out. Some schools give you a personal portal that you can log into to track your application status all the way through the process. While you can log in any time, until decisions are posted all you see is that your application is complete. Sometimes these schools give you a heads-up about when your decision will be posted on your portal. That’s a good thing. Until you log in at that time and find that the server has crashed from overload. So you refresh the page continually until you get your decision. If you haven’t hanged yourself from page-refresh frustration.

Other times, there’s no notification about when the decisions go up, so it’s up to you to check your portal. Periodically. Okay, obsessively. Also known as whenever you have a spare moment, at any time of the day or night. And again, you’re back stalking College Confidential to see if other applicants have gotten their decisions or are proliferating rumors about when that school might post.

Some schools don’t have portals at all, and instead, when they’re good and ready dammit, they send you a groovy email with a link to your personal decision letter. Sometimes they tell you in advance when to expect that email. Other times they arbitrarily shoot you the email while you’re, say, rolling your eyes at the hibachi chef who’s flipping shrimp tails into his jacket pocket or waiting for the pharmacy dude to fill your allergy meds at CVS. Talk about inauspicious and unceremonious. And often when you click the link, the server is—wait for it—overloaded and you have to refresh that freaking page over and over, each time your blood pressure climbing ever higher while your hopes grow precipitously dimmer.

The most inhumane situation is when you find out from a friend or randomly on College Confidential that people have started getting emails from a particular school entirely out of the blue. Which means you will not eat, sleep or pee until you get your email. Which could be any minute now. Or it could be in five hours. During which time you’ve refreshed your email 300 times and convinced yourself that: a) your application was never complete in the first place, b) you gave them the wrong email address, c) your email server is down forever, and of course d) they hate you, have decided to taunt you on purpose, and there’s no chance you’re getting in. Eventually you don’t even give a crap what the decision is; you just want that godforsaken email. When it finally does arrive—just as you’re about to jump out the window—you click that link. Server overload. Please try again in several minutes.

And forget about the charming custom of phoning friends and family with your news. Positively prehistoric. Now word spreads like wildfire. Around these parts, if you get into a place where you’re going to enroll, you giddily post statuses to Facebook and Twitter with the name of the school and your graduation year. Preferably in all caps and with 37 exclamation points to convey your euphoria. You maybe even Instagram your acceptance letter for all to see and admire. Or post a baby picture of yourself wearing a onesie emblazoned with the college logo because, you know, there was never any doubt.

On the other hand, if you get accepted somewhere that’s not your first choice, etiquette dictates that you notify a friend, who dutifully posts a congratulatory status to your wall so everyone knows. That gives the appearance that you’re not so narcissistic as to announce it yourself. Right.

And if you’re waitlisted or denied? Maybe you tell your besties, who whisper discreetly to the greater population. Or maybe you do a self-deprecating post with an FML hashtag.

Not that I’ve seen any of this happen first-hand, mind you.

The last of the decisions roll out on April 1st. Which just happens to be the very day we have our twins’ college guidance meetings. See, we get the joy of doing it all over again. Right away. In double-time.

2 Responses to “The College Decision Frenzy”