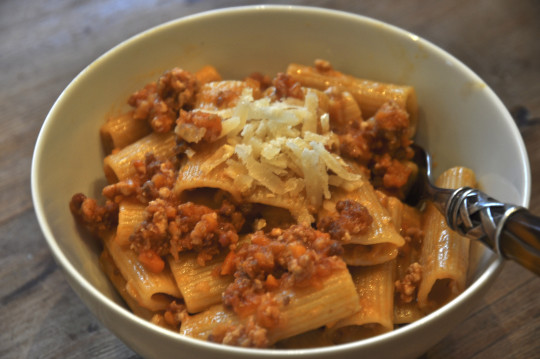 How I wish you could smell my house right now. There’s an enormous pot simmering away on the stove, and the aroma of pork, fennel and white wine is sneakily wafting around the corner into my office. It’s all savory and comfort-foody and yummy. And when I say an enormous pot of sauce, I mean I six-times’d (sextupled?) the recipe so in addition to feeding my gang, I could feed the freezer and have a bunch of those magical moments when there’s no ambition to make dinner — and then you open the freezer and see a container of this scrumptiousness sitting there and there are angels’ voices singing and the swirling freezer frost adds…

I pulled out one of my long-lost, all-time favorite grill recipes last weekend, and apparently I haven’t made pork tenderloin in years, because the boys told me they’d never had it before. And they were kinda peeved that I had held out for so long because they all loved this easy, yummy entré!

Pork tenderloin isn’t the most flavorful meat on its own, but the simply blender marinade adds some tangy citrus flavor and a hint of spice from the cayenne. Truth be told, I don’t always have both variations of chile powder in the pantry, and I often just double up on whatever’s on hand. It’s always good. The recipe calls for… 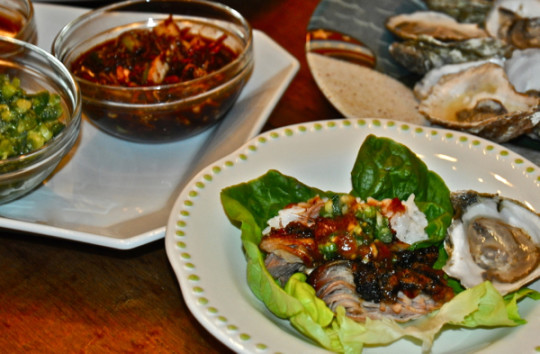 Ah, the power of suggestion. Last week, a piece in the New York Times reminded me of one of the best family dinners we had in 2011: a fabulous Friday evening savoring the Bo Ssam meal at Momofuku Ssam Bar. David Chang’s restaurant takes reservations for tables of 6-10 diners, who are served a life-changing whole slow-roasted pork shoulder to pick apart with tongs and assemble in delicate lettuce cups, topped with divine kimchi and other scrumptious fixings, all capped off with fresh slurpy oysters. Pork shoulder and oysters- well, isn’t that just the quintessential Shabbat dinner for every nice Jewish girl?!

The Times’ photo made my mouth water, and as I read the article, I… 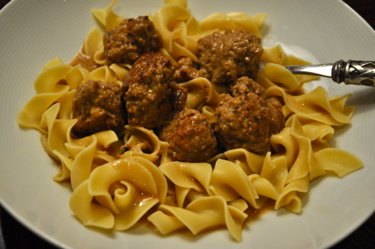 When a Swedish Meatball recipe says it serves “4 Vikings or 8-10 regular people,” I know I’ve found a recipe for my crew. Despite the fact that they each devour an entire box of chicken nuggets as an after school snack, my guys are all once again ravenous by dinnertime. And since there’s no telling just how many Swedish Meatballs my bottomless pits would put away, I boldly doubled the recipe. That’s a lot of Vikings!

Swedish Meatballs bring me back to days of groovy plaid bell bottoms, a smokin’-hot Dorothy Hamill ‘do and oversized eyeglasses with stylish side pieces that started at the bottom of the glass frame and made two 90-degree turns to reach my ear….

(Wait – “real” meatballs? As opposed to, what, mock meatballs made from Ritz Crackers?)

There’s only one problem with these meatballs. No matter how many I make, I never have leftovers for the freezer.

I try. I really do. This time I started with five pounds of ground meat. That’s two-and-a-half times…