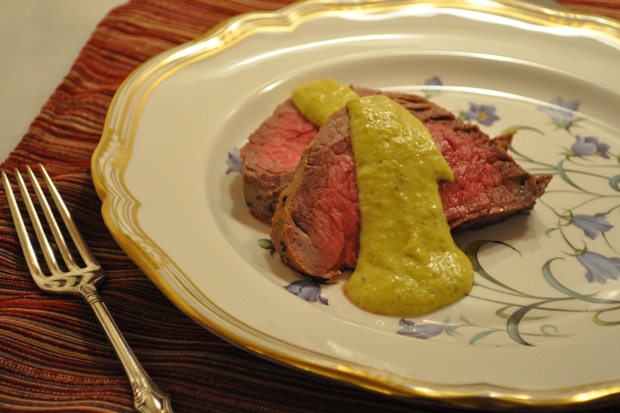 While typically I rule the kitchen and Dave is the Grillmaster, the one thing Dave really rocks on the stove is béarnaise sauce. He has long used a recipe from a beat-up, falling apart Betty Crocker cookbook from the year one, and it is just the most delectable sauce ever to be made. Butter, egg yolks, tarragon, shallots, vinegar…sighhhhh. My sister claims she’d be happy with just a dish of it and a spoon. And a Lipitor chaser.

Sometimes, though, let’s just say Dave has “worked too hard during the day” to take the time to finely mince the shallots, and he ends up cutting them into large dice instead. Which means they don’t soften completely. Which means you wind up with a chunky, crunchy sauce. Which has a decent flavor profile, but not the smooth, creaminess you want in a béarnaise.

Ina notes that you really need to make traditional béarnaise at the last minute, which can be a pain when you’re entertaining. If you make the sauce too early, it usually winds up breaking (although I know that whisking in a few drops of hot water will often do the trick to repair a separated sauce). The other challenge is to cook the egg yolks ever so gently so they emulsify rather than scramble. To accomplish this, Ina has you cooking the vinegar, shallots and tarragon on the stove, then cooling the mixture slightly and adding it to the yolks that are waiting ever so patiently in the blender. The idea is that the vinegar mixture tempers the yolks, and then you add the hot melted butter through the opening in the top of the blender to “cook” the eggs while whipping and emulsifying the sauce. It also obviously minces the shallots so there’s no danger of a chunky sauce.

In theory, this is a groovy technique. In reality, we needed to dump the liquidy mixture from the blender into a pan over gentle heat and add a few more egg yolks to thicken the sauce. Not sure if the vinegar mixture was too cool, the yolks were too cold or too small, or if the butter wasn’t quite piping enough. A quick and easy fix, though, and I was glad we had some extra eggs in the fridge to toss in.

How did it taste? Scrumptious. Tangy, rich, buttery, creamy, tarragon-y (perhaps my favorite herb). Perfection! We didn’t use the steak part of this recipe, instead we used Ina’s foolproof roasted tenderloin recipe. There’s wasn’t a scrap of meat left from a four-pound tenderloin and only a few spoonfuls of the doubled recipe of sauce remained, which I have saved for my sister, who’s coming to visit this weekend!