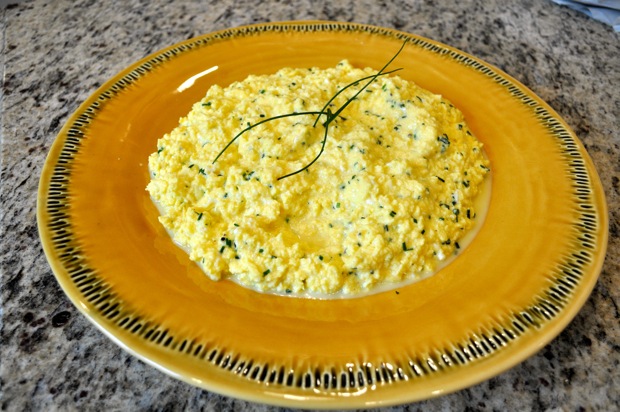 Oh, how I wish I loved eggs. I so admire folks for whom breakfast has such glamorous options ““ fancy omelets, sunnysides, poached, Benedict. But about the only way I’ll venture a taste is to scramble them into virtually unrecognizable form. My sister, one of the other tasters today, concurs.

Nothing worse than dried-out, overcooked scrambles, and Ina’s slow-cooking method is so appealing because it pretty much ensures you avoid that danger. Medium-low heat + continuous stirring = nice creamy eggs. And in reality, that’s just what happened. It’s just that they didn’t taste all that good. They were ultra-rich, and one taster deemed them inedibly salty.

Hmmm, too salty. Let’s see what might account for that. The most likely explanation would be that we added too much. But I feel obliged to show you the 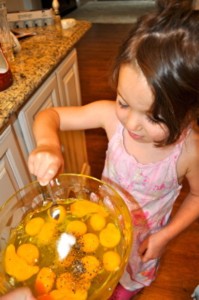 chef who was responsible for the addition of salt, and let me say that she measured exactly perfectly. Plus, she’s way too cute to blame, doncha think?

So that led to a discussion about our second theory: that in general, Barefoot recipes call for a wee too much salt. David finds that to be true pretty often, although I think determining salt quantity has to be the hardest part of recipe development, since home cooks’ ingredients may vary quite a bit from the tester’s as far as quality and size. We agreed that we might want to dial back the salt a bit in recipes going forward.

The third theory, and likeliest explanation, is that we didn’t use enough goat cheese, which might’ve been intended to offset some of the salt. Technically there was enough goat cheese at the outset, and the first tiny disk I unwrapped was creamy and luscious as I stirred it into the pan of warm eggs. But I opened the big disk of Coach Farm cheese to find that, sadly, it was semi-frozen. Refrigerator issues…long story…don’t ask. (Now there’s a dessert idea: semifreddo goat cheese with local honey and walnuts…) And I didn’t think it wise to destroy the integrity of the 16 eggs I had just stirred for 12 minutes by adding a slushy chunk of cheese. I ended up adding probably a third the amount of cheese called for, and our thought is that the rest of the cheese might’ve added a tangy balance to counteract the saltiness.

On the other hand, more cheese would’ve added even more richness to an already very rich dish. But for my sister and me, that might have been a good thing ““ it would’ve ultimately meant less of a focus on the eggs and more on the other tastier stuff.