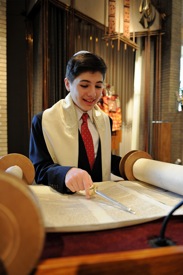 In teaching Torah yesterday as he became a bar mitzvah, Ben explained that you only truly understand certain things (in this case mitzvot) when you actually do them. As an example, he said, “I could stand here today and tell you all about this cool roller coaster called Boulder Dash I went on at Lake Compounce last summer on my trip from Eisner Camp. I could tell you that it’s almost a mile long, it goes up to speeds of 60 miles per hour, it dips and climbs, its biggest drop is 115 feet, and the ride lasts for two-and-a-half minutes. But unless you experience it yourself, you’re never going to feel the thrills, the chills, the butterflies in your stomach, the numerous spine-tingling ups and downs of the actual ride.”

Well the same could be said of his special day itself. You could hear a report that Ben led the beautiful service with exquisite poise and masterful confidence, you could read his D’var Torah, you could read a transcript of Rabbi Mendelson’s personal heartfelt words to him, you could read the clever lyrics to Cantor Silverman’s memorable song lovingly written expressly for Ben, you could read our family’s hopeful blessing for the bar mitzvah boy…but you would never, ever be able to feel the joyous warmth and pride and love that overflowed the sanctuary. You’d never hear the laughter that filled the room at certain points during the service, nor be moved to shed a tiny tear watching the three younger brothers read the Prayer for Peace. You would not be able to replicate the special feeling of a day that was exponentially more than the sum of its parts.

Ben’s genuine soulful commitment to Judaism was the overarching spirit of the day, and it flowed from the bimah in words and songs and traditions and emotions. From the moment we began planning this simcha last summer, our focus has been to honor the significance of Ben becoming a bar mitzvah and have a meaningful celebration of his accomplishment, rather than turning the service and Kiddush luncheon into an over-the-top extravaganza. We wanted the “wow factor” to be Ben and his achievements. He worked so hard to reach this special day, and he was as honored and humbled as we were to be surrounded by so many people who traveled distances and made gracious efforts to be with us. You don’t need fancy place cards or specialty linens or headline entertainment when the sparkling backdrop to your day is loving family and friends. During the understated luncheon, we celebrated Ben with a sweet video montage of his life to date (email me for access if you have a YouTube account and would like to view the 9-minute video), and he then honored every one of his guests by having them all share in his candlelighting ceremony. In lieu of gifts, Ben had requested that guests instead make a donation to Susan G. Komen for the Cure to support a cure for breast cancer, and he proudly and gratefully announced the total he had received so far from extraordinarily generous family and friends. We were touched by the love and praise for Ben, and one of my dear cousins made my day when she said my great-grandmother, my grandmother and my mom all would have kvelled, and she pronounced the day menschkeit.

Of course we Reisers are not known to pass up any opportunity to host a rocktacular celebration though, and so after the festive religious event during the day, we entertained at a much smaller, strictly social event at night. The magical evening featured a blowout bash for Ben and 65 of his buddies, many of whom had come from out-of-state to share in his day. And we weren’t about to have our absolute dearest friends in the world all in Westport at the same time for the bar mitzvah and not take the opportunity to socialize together in style, so 30 of us enjoyed a glamorous grown-up dinner party…and then ended our evening in the kids’ room on the raucous dance floor. As Ben’s friends all affirmed in their day-after party reviews, “DJ Todd totally rocked the house!” My tired feet proved it!

As the event planner, there is not a single element of any part of the day I would have changed. And more importantly, as the mother of the bar mitzvah, there is not one moment that won’t make me beam when I look back. Everything was a labor of love, and after I take a few minutes to catch my breath, I’m looking forward to doing it all over again in a different way next year for the twins!