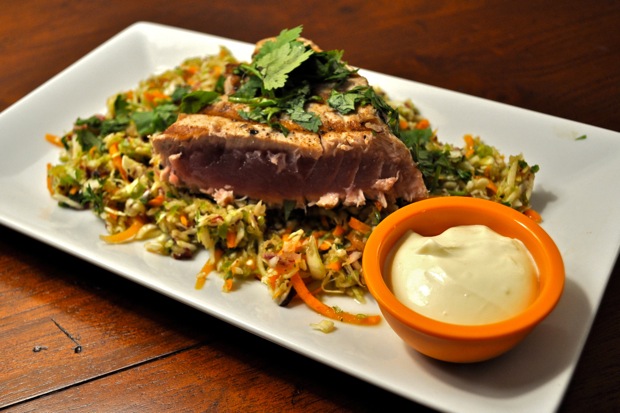 Okay, okay, pipe down now. I know this recipe isn’t from one of Ina’s books per se, BUT…it’s from Anna Pump, whom Ina calls her mentor. Anna’s specialty food shop, Loaves and Fishes in Sagaponack, is beloved here in the Hamptons, and her fourth book, “Summer on a Plate,” even has an endorsement on the front from Ina, who says, “No one has inspired me more than Anna Pump…” So that kinda counts, right?

Plus how could I not share the dish that all seven diners (including guest diner Uncle Dan) gave the maximum five stars?

So here’s the scoop. Yesterday afternoon we wound up at the Friday Farmers Market in the Nick & Toni’s parking lot just as everyone was packing up. In the first stall, just about done stashing his fish in the cooler, was Alex from The Seafood Shop, our favorite fish market in Wainscott. He was just wrapping up the last of the tuna when we caught a glimpse of the gorgeously pink pristine fish. When he mentioned that the tuna was running locally, we positively couldn’t resist and decided to build our dinner menu around this glorious find.

Trouble is, Ina doesn’t do a lot of tuna entrés. Sure, there are some niÃ§oise salads and a tartare recipe, and a seared tuna with mango chutney, but it would’ve been mango overload with the grilled shrimp we had made just the night before. So I pulled out Anna Pump’s gem and found this simple recipe. (With my Westport cookbook collection well into the hundreds, all I wanted here was the Barefoot library, Bittman’s bible, Anna Pump’s classics and my treasured “Cucina Simpatica” by George and Johanne from Al Forno.)

The recipe had me at hello ““ Anna prefaces it by writing, “Tuna is at its best when it has been briefly seared on a very hot grill, keeping the center raw and juicy.” Bingo! I subscribe to the philosophy that it is downright “cooking heresy” to take a phenomenal piece of sushi-grade tuna and cook it to a gray fare-thee-well. Instant grounds to revoke your kitchen apron as far as I’m concerned.

Anyway, she goes on to caution you not to be put off by the list of ingredients because preparation goes really fast. And right she was! You put all the veggies through the shredding blade on your food processor, and I couldn’t have been happier to have the opportunity to break in the new Cuis. You’re done with that in a jif, shake up a quick Asian vinaigrette, mix up the wasabi cream and grill the tuna. Although I usually serve family style, I decided to plate one serving the way she says ““ just for the photo op ““ with the slaw beneath the tuna. The gang was so impressed, we ended up plating everyone’s.

But holy cannoli ““ if we thought the plating was impressive, the flavor was over the moon! Most importantly, the grillmaster brilliantly managed to sear the outside of the tuna and leave the inside raw and juicy ““ just the way it should be. The wasabi cream helped tie together the whole dish so with every forkful you got a bite of meaty tuna, a hit of Japanese horseradish, and a whisper of sesame oil in the crunchy slaw. What took the dish completely over the top was the cilantro garnish, which added a bright freshness, sending it into the culinary stratosphere.

I have eaten at many top-rated restaurants around the world that have served me far inferior dishes. If you’re a tuna fan, I can’t recommend a much more perfect recipe than this showstopper!