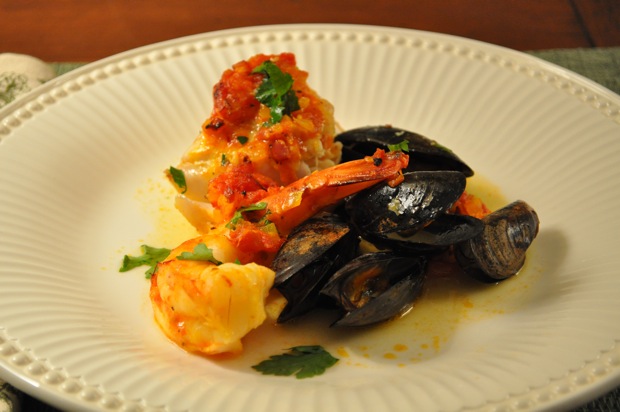 Striped bass is a family favorite, so when we went to the funky aquaculture fish market at Cranberry Hole and found fresh stripers that had been caught that morning, we bit ““ hook, line and sinker.

Normally we grill it, and I make a topping I created a few years back out of a bounty of ripe tomatoes, onions, mint, parsley and a few other fresh ingredients. But this recipe, with shrimp and mussels, all roasted with a bouillabasse-like sauce in the oven, looked delish. When we found enormous Peruvian heads-on prawns at the store, we knew this recipe was meant to be. And it was also quite befitting that we finally saw Julie & Julia that afternoon…coincidentally we had paired this recipe from the Paris book with the ProvenÃ§al Tomatoes, which Ina notes are similar to Julia Child’s stuffed tomatoes from Mastering the Art of French Cooking. (Adored Meryl Streep and delighted in the glorified bio-pic of Julia and her mad love affair with Paul; found the Julie story flat, thin and utterly self-indulgent…sort of like the immature Julie herself.)

The most time-consuming part of this recipe was shelling and deveining the prawns and skinning the fish fillet. (I got to have a fabulous flashback to a mini-course I took at the Ritz Escoffier in Paris, in which I learned to scale, fillet and cook a charming sea bream. It’s all about the knife!) The sauce of onions, pancetta, tomatoes, saffron, wine and Pernod is poured over the seafood and the whole pan goes into the oven for 20-30 minutes.

Anticipating the sauce, I knew we needed some form of bread to sop up the tomato-saffron-winey goodness. I had bouillabaisse on the brain, and decided we should have some baguette toasts with rouille. Scrappy gal that I am, I remembered the cheers I got for Ina’s saffrony rouille with the Chicken Bouillabaisse recipe in the Back to Basics book. So I set to work mincing the garlic with salt, and hauling out the food processor to make the quintessential emulsion of egg yolk, lemon juice and olive oil. Except for some mysteriously absurd reason, these ingredients… Just. Refused. To emulsify. I’ve made mayonnaises and aiolis a million times, and never have eggs and oil not whipped themselves into a glorious golden emulsion. I added another yolk, then a bit more oil. Nothing but a soupy mess. Chef David swooped in ““ in an attempt to be the kitchen superhero and save the day. He figured we just needed some blender action, but no, that didn’t work either. He dropped yet another yolk into the blender and slowly added the rest of the unemulsified liquid…no dice. In a last-ditch effort, I suggested adding a dab of dijon mustard, which inevitably does the trick with salad dressing. And guess what. Bzzzzzzz…thanks for playing our game. So Mr. In-Sink-Erator savored a scrumptious garlicky protein shake for dinner. (Not quite sure what gives…my only theory is that it had something to do with the Hudson Valley eggs that purport to have some astronomical level of DHA Omega 3s and Vitamin E. Please wax on in the comments section if you have any other possible explanations.)

The tomato-saffron sauce was as delectable as expected. But believe it or not, the seafood was terribly disappointing. The fish ““ fresh and gorgeous as it was ““ was fairly tough, quite possibly owing to Chef David’s urging to leave it in the oven for “a few more minutes.” (Update: our fishmonger suspects the toughness was a result of the fish being filleted immediately after it was caught rather than allowing it to rest for several hours before cutting.) The mussels were bizarre ““ for every one with a small, tasty morsel in it were five more that had virtually nothing inside the shell. The shrimp were good, although the heads had been so filthy when we were doing the cleaning, we decided to sacrifice them rather than risk ruining the entire dish with grit. Admittedly the whole thing was far from inedible, but it wasn’t nearly as enjoyable as we had hoped.

Rest assured, however, we sopped up every drop of that dreamy sauce with Eli’s yummy sourdough. Ultimately it wasn’t the recipe that failed us-’twas the fish that sullied the dish.