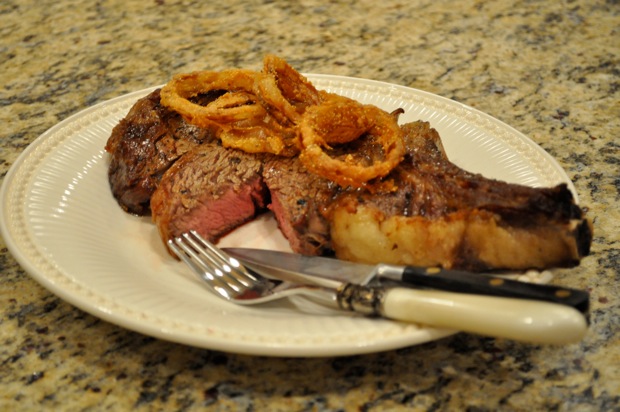 I must admit I wasn’t exactly looking forward to making this recipe, chiefly because of the time-consuming frying process…times two for my ravenous crew. And although I like onion rings just fine, thankyouverymuch, I’ve never had one that would compel me to willingly stand over the stove and tend a pan of hot oil for half an hour.

That is, until now. Meet the Cornmeal Onion Ring.

Jake had been clamoring to make this dish for a couple of weeks now, and I finally gave in to that cute, pleading face. Together we cut the onions and soaked the rings in buttermilk for an hour. And then it must’ve been my lucky day, because David reluctantly agreed to repay a favor and handle the tedious frying. He moaned and groaned at first, until the premiere golden batch of rings was resting on paper towels. Nostrils flared, he proudly set aside the first few trophy rings and told me 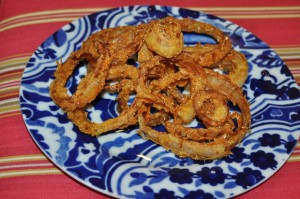 to grab the camera for the glory shot, thinking the rest of the batches couldn’t possibly look as good. But lo and behold, every subsequent batch was as perfect as the first, and when we finally grilled and sliced the steak, the chefs thought a photo of the whole dish together would be even more impressive.

Dave’s got his grilling formula for steaks down to a science ““ and he even rocked in the clutch when his dreaded fear came true early in the grilling process and his only propane tank was emptier than my beach-ified brain in August. He finished off these prime beauties in a cast-iron pan on the stovetop and then in a hot oven, yanking them at precisely the right moment for medium-rare. We plated everything and dug in…and the six of us absolutely swooned over these onion rings. Cornmeal makes for a thin, crunchy, almost pebbly coating ““ rather than the typical thick, greasy beer batter ““ and the onions were lusciously soft and candy-sweet. (I did a perfuctory search on the chemistry of soaking onions in buttermilk and nothing surfaced immediately, but I have to believe the buttermilk softens them and draws out some of the sharpness.) The contrast in textures was brilliant, and the combination of salty and sweet, scrumptious. (I loves me my chocolate, but give me sweet-salty fleur-de-sel caramels any day and I’m in ecstasy.)

We all agreed: this was one of the best dishes of the summer, and there sure as heck were no leftovers in Reiserville. And yes, I’d even belly up to the stove myself next time to do the frying. They’re well worth it.