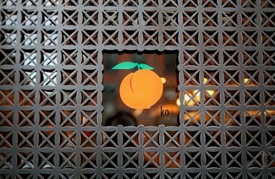 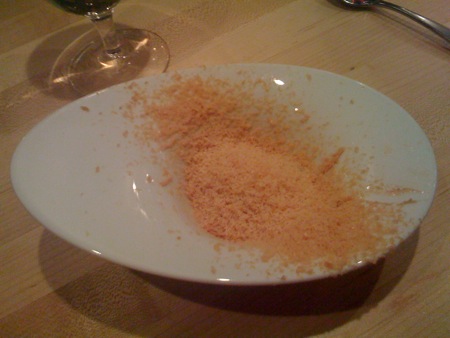 Any guesses? Whoever said, “Shaved frozen fois gras over pine nut brittle, lychees and Riesling gelée,” –you’re RIGHT! I think I may have actually licked the plate when I was done, as I didn’t want to leave one drop unconsumed. The brittle was sweet and crunchy and nutty, while the lychees were smooth and fruity. The gelée added a bit of sweet acidity and the foie gras just took the whole dish into orbit, with the tiny unctuous dust binding the dish both texturally and taste-wise. (There has to be a more melodic word here. Flavorally? Tastely? You see where I’m trying to go?)
Finally came the dish we had been anticipating for nearly the whole meal. All along, we had watched as one of the chefs had threaded a pristine deboned, scored Long Island duck onto a long metal rod and suspended it over a large pot of hot peanut oil. He would baste the duck with the oil every few minutes, and we were told that within half an hour or so, the duck meat would cook through from the heat of the oil below and the skin would turn mahogany from the gentle oil bath. Check out the chef giving the oil bath below: 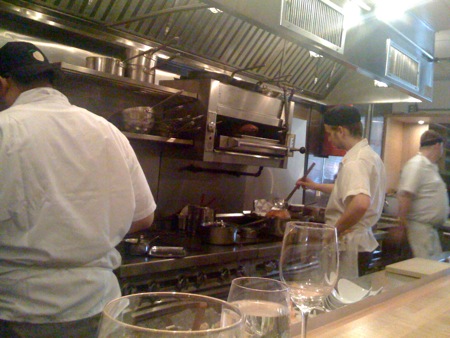 Astonishingly, the duck required only a few more minutes in the salamander to finish cooking after the skin had reached its gorgeousness. Upon presentation, we were told it had been stuffed with duck sausage, served with a cassis sauce, a grilled rice cube and grilled ramps. You know how sometimes in life you wait with great anticipation and it doesn’t quite measure up? Disappointingly, this was one of those cases. Though the trend is to serve duck medium-rare, this was much more on the rare side. Again, the thickness of the slab of meat was an issue – a more delicate slice would have been tastier. David’s piece had a grisly piece of silver muscle running through it, which made the dish pretty unappetizing as a whole. The ramp was yummy, as was the toasty, crispy cube of grilled rice. But overall, the dish was a huge let-down.
And so on we moved to the impeccable cheese course, which was a piece each of Singing Brook cheese (a hard sheep’s milk cheese) and Humboldt Fog (one of my long-time favorite goat cheeses, coated with vegetable ash), along with smoked cantaloupe jam, sweet and sour red onion compote and pork-fat brioche. Nice balance of textures, sweet and tart flavors, and tell me, who would complain about pork-fat brioche? High marks for the cheese plate.
Our penultimate course was refreshingly satisfying: Arnold Palmer ice cream with individual yellow cake crumbs (which had somehow been skim-coated with a nuance of white chocolate for richness and to keep them from clumping together). Light, with a tartness from the lemonade-iced tea flavor of the ice cream and an inexplicable sweet creamy crumbliness to the cake.

And finally, parsnip ice cream with red grapefruit pulp and hazelnut nougat on a smear of fudge sauce. I expected more tanginess from the grapefruit against the otherwise mellow flavors in the dish, but it was a satisfying end to the meal, nonetheless.

Ultimately I would say that half the fun of the experience was the food, and the other half was a combination of fascination with the preparations going on in front of our eyes and sheer lust from the whole “this-is-not-what-nice-suburban-moms-do-on-Friday-afternoons.” Now I see why Momofuku Ko won this year’s James Beard award for Best New Restaurant and why Dan Barber, from Blue Hill (the meal that will be nearly impossible to top), took home the higher honor of Outstanding Chef. I have great appreciation for the thoughtfulness and playfulness of the food at Ko, though. They reconceptualize food in a creative and meaningful way, and while every bite wasn’t life-changing, enough of them were remarkable and thought-provoking that I will remember the experience. (Will it make the “Wall of Fame?” Hmmm…well, there is no menu – I took all those notes as we were eating. But I just might frame the lucky peach for the wall to memorialize our special naughty afternoon!)