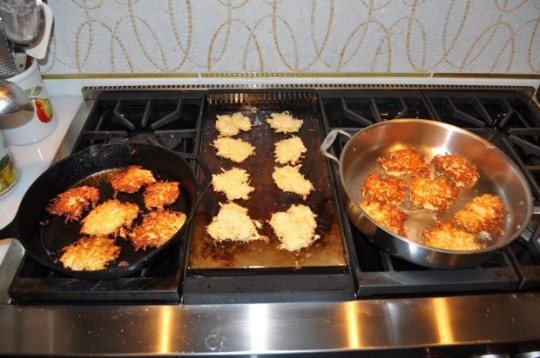 My mom loved ′em crunchy, but I remember hers coming out fairly mushy, and once I developed my own recipe for them, she was more than happy to let me do the honors and not bother with them again. Mine are crispy on the outside and soft on the inside, and a big thumbs-up for onions. And now that the boys eat us out of house and home and I have to double my recipe, I suit up, pull out a bunch of frying pans and turn into the latke queen! I think my résumé should include the fact that I can fry three pans of latkes simultaneously. Plus I can chew gum at the same time, and hum the theme to Hawaii Five-O. Oy, such talent!

First, I usually hand-grate the potatoes, drudging as can be. While a food processor with a grating wheel is quick and convenient in a pinch, if I have the time, I prefer to do it by hand. I use mostly Yukons, and sometimes I add a russet or two for good measure. I grate most of the potatoes coarsely, maybe a third of them finely, and same with the onion. You need to let the potatoes drain for a while to release a lot of liquid and starch. (My favorite thing is to draw my finger through the starch that collects on the bottom of the draining bowl.) I then take a paper towel and push down on the drained potatoes to expel the rest of the liquid. I add flour and egg, a touch of salt, and then fry them in a decent amount of hot oil — vegetable or canola or peanut, depending on what’s in the pantry. Sprinkle with kosher salt as soon as they come out of the pan, and it’s all I can do to keep from eating them all before serving.

You can serve the latkes with yummy applesauce, or for a savory topping, plop a little dollop of crème fraîche or sour cream and then add a bit of caviar (schmancy!) or some snipped chives or a piece of smoked salmon and a dill spring.

Me? I just like ′em naked. Er, the latkes that is!

1. Grate the potatoes and onion, most coarsely and some finely. Drain in a strainer or colander, then press with a paper towel to squeeze out excess liquid.

2. Add eggs, flour, and salt. Mix with a fork (or clean hands) to combine.

3. Heat about 1/4″ of oil on medium-high in a large frying pan. Drop heaping tablespoons of the potato mixture into the pan and press with the back of the spoon to flatten out into 4″ circles.