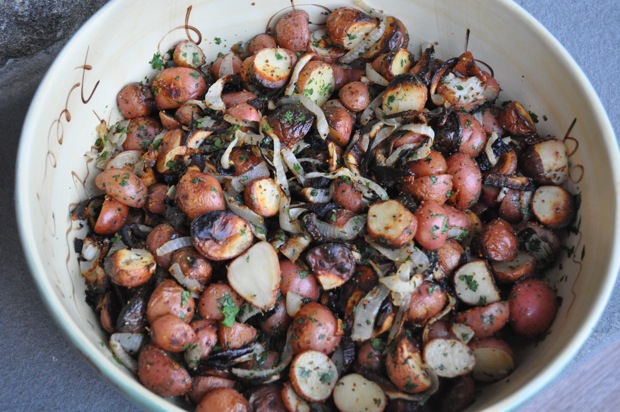 Roasted potatoes are my side-dish go-to when I’m feeling lazy. Cut up a bunch of Yukon Golds into small chunks, toss with olive oil, minced garlic, salt-n-pepa, and pop it into a hot oven on a half-sheet pan to roast until creamy and crunchy. Sprinkle on some chopped parsley before serving, and no matter how many pounds I make, there is rarely a morsel left.

The most enthusiastic potato fan in the hizzy is Big Ben. While his buddies know full-well that french fries are not safe in his presence, they might not be aware that he’s not opposed to potatoes in most other forms as well. So it was only logical that he tackle this recipe, and from beginning to end ““ including the dazzling rustic French-inspired photograph of the finished product ““ Ben was the man. He executed, unassisted, with utter perfection, and the star ratings in no way reflect his cooking skills.

What the star ratings do reflect is a rather bland, mediocre recipe. We all felt the mustard didn’t add anything particularly zippy to the potatoes, which are fairly waxy and flavorless to begin with. They don’t crisp up in high heat, nor do they become ultra-creamy like richly-flavored, sweet Yukons. It takes a lot to enhance the flavor of red spuds, which is why I usually save them for dishes that need a sturdy potato, say, potato salad or chowder.

We nibbled on these with our grilled chicken, but the best thing to come from this dish was the confidence and pride of the handsome chef.