Meet My 18-Year-Old…In His Own Words

Seems like yesterday, but it was 18 years ago tomorrow that I received one of the most precious gifts I could ever, ever imagine. Our first bundle of joy was mere seconds away from officially entering the world, and to commemorate one of life’s few remaining surprises, David and my doctor, whose name is Ben, looked at the face that had barely made its grand entrance and took one final guess about whether we were about to welcome “Emily Devorah” or “Benjamin Maxwell.” I felt very much out of the loop from my vantage point (to say the least!), but the two of them heartily agreed the face was far too pretty to belong to a boy.

And but a moment later, there were two Bens in the delivery room!

Our beautiful firstborn has grown from a delicious, bright, cheerful little guy into a loving, wise, hardworking young man. He and I spent tons of time alone together in those early day, with daddy away traveling most of the week. We played and cuddled and sang and read and rocked in the glider chair and people used to stop us in the grocery store and the mall to excitedly point out that he and I had exactly the same face. (In fact they still do, although I continue to contend it’s a much lovelier face on him than on an old lady like me!) I vividly remember going

into his bedroom every morning while he would be playing quietly in his crib, and I’d wait for him to spot me so his face would light up like sunshine as he pulled himself up on the side rail. Still a toddler himself, Ben became a big brother at the age of 16 months, and it’s a role he’s embraced brilliantly, as his three younger bros proudly look up to him, admire him, and aspire to his drive and success.

Believe me, I could go on ad nauseum as the sappy mom, extolling Ben’s virtues, accomplishments and smoochable chipmunk cheeks. Maybe you’re rolling your eyes already because you’ve heard me share so many of his achievements over the years. But what you may not be aware of is the lifelong challenge Ben has not only faced head-on, but has valiantly overcome far beyond anyone’s expectations. I thought it would be most meaningful to give the birthday boy the opportunity to share his story in his own words, and he gladly offered me the essay he sent to colleges in the fall. Suffice to say, I couldn’t possibly be any more proud of this guy.

I love you to the moon and back, buddy, and wish you a joyful birthday and a magical year ahead! 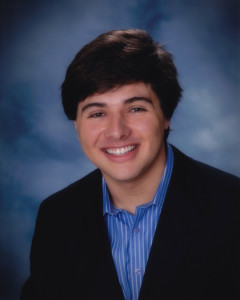 “If he does develop meaningful speech, I don’t know how he’ll sound. And, with his degree of hearing loss, he’ll need to be educated at a school for the deaf.” So prognosticated the audiologist, as she diagnosed me with bilateral severe-profound sensorineural hearing loss. I was seven weeks old.

Traveling three hours each way for hearing tests is not especially thrilling for a nine-year-old. A dead battery just before a presentation can rattle your confidence. Awakening to find your dog chomping on your aids and having to live in silence for days while they are being repaired is challenging. But unmistakably, technology has been a blessing. As the first infant worldwide to use digitally programmable hearing aids, not a day passes that I am not grateful for what are now virtually inconspicuous devices that enable me to hear.

There were semiweekly trips to the speech pathologist for my first five years and continued support in my public elementary school for the next five—perpetually practicing speech sounds, learning language, identifying idioms. I was determined to sound like my family, my friends. It was hard to cognitively recognize “s” sounds—“slippery,” not “lippery”—and to distinguish between words like “dam” and “jam,” but gradually, eventually, I mastered receptive and expressive language, despite not hearing sounds the way most people do.

There have been moments of humiliation and anguish along the way. I remember the profound ache in fourth grade when my two pals since preschool ditched me. “We don’t want a friend with hearing aids anymore,” they said. I remember all eyes on me when I asked the teacher to repeat a spelling word—I heard “eagle” and “deagle,” which I knew was not even a word, rather than “beagle.” I remember praying no one heard the high-pitched squeal of my hearing aid as I wheeled myself onto the stage as FDR, white gloves and pince-nez in place, in a youth production of “Annie.” But with age and maturity, self-consciousness evaporated, and now my occasional hearing-related gaffes elicit lovable ribbing from my friends, providing fodder for good-natured inside jokes.

Some nights I am Raggedy Andy from the strain of listening, lip-reading and searching for context clues all day. But I wake up recharged each morning, recommitted to challenging myself, seizing every opportunity, and striving for excellence in all I do.

As a candidate interviewing for my school newspaper’s Managing Editor position last spring, I was asked by the outgoing editors to name a song reflective of my life. I saw my peers’ apathy turn to intrigue, then to incredulity as I explained my seemingly trite choice of Journey’s “Don’t Stop Believin’,” sharing with them what it has taken to so exceedingly eclipse my audiologist’s limited expectations. I had long assumed my hearing impairment was self-evident but I quickly realized it was news to most of my newsroom colleagues. Even before learning I had received the coveted editorship, I quietly celebrated a meaningful personal triumph: the tiny towhead with bulky aids flopping over his ears had genuinely evolved into a scholar, a leader and a respected student journalist.