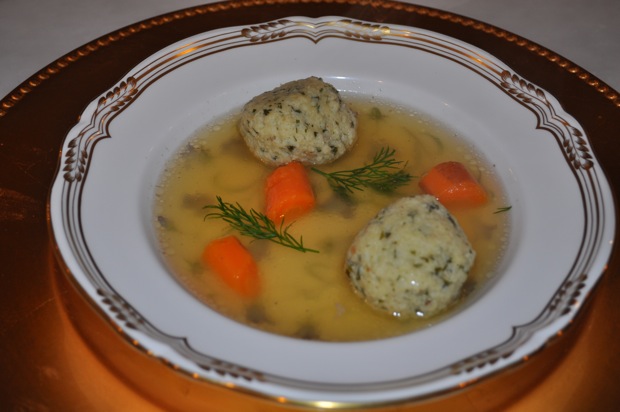 In honor of our interview with Ina Garten (the Barefoot Contessa) last weekend, and because it’s the last day of Passover, I wanted to share our review of what finally became the first recipe that actually turned out amazing matzo balls. Mmmmm…balls. I mean, no one can resist a Schweddy Ball-nothing beats those Balls-but these came mighty close!

I like my balls tender, light-but not so light that they dissolve — and they have to be tasty, too. I grew up eating my Nana’s k’neidlach, which she made from a box, but I’m just not a box kind of chick, so I really wanted to learn to make them from scratch. There are three secrets to scratching your matzo balls (hee! I just totally cracked myself up!):

1. let the eggs come to room temp so when you whip the whites, they incorporate a lot of air and get really fluffy

2. use schmaltz — rendered chicken fat — which you can make by skimming the fat from homemade chicken soup and then refrigerating it, or you can buy in the freezer section of the supermarket (my local Stop & Shop carries it)

3. refrigerate the batter for at least an hour before you shape it into balls

Skip any of these steps, and you will wind up with either hockey pucks or matzo flotsam that doesn’t hold together. The Barefoot Contessa recipe includes minced parsley, and I like to add some minced fresh dill as well. But if you have kids who have an aversion to anything green in their food (been there, done that — and I promise that it almost always eventually blows over!) you can leave out the fresh herbs and the balls come out perfectly delish. A couple of friends advised me to keep the lid on the pot until the balls are done (I think that’s the instruction on the box of matzo ball mix?), but this recipe doesn’t even call for putting a cover on the soup when you’re cooking the balls. It does mention that you should turn them over halfway through cooking, but I found that these magic balls turned over all by themselves!

FYI, I doubled the recipe and ended up with 38 balls-and they were all gone! by the following afternoon. Wow! My mouth is watering just thinking about those balls!

Okay, okay, how could I not share Margaret Jo McCullen and Teri Rialto chatting up Pete Schweddy about his delicate, glistening balls?! Good times, good times. (Sit through the annoying ad…it’s worth it!)

Whisk together the egg yolks, chicken stock, chicken fat, parsley, and salt. Stir in the matzo meal. In the bowl of an electric mixer fitted with a whisk attachment, whip the egg whites with a pinch of salt until they are stiff. Whisk them into the matzo mixture until it is smooth. Refrigerate for at least 15 minutes, or until the mixture is thick.

Form balls the size of golf balls by shaping them with 2 spoons, rolling them with your hands, or scooping them with a small ice cream scoop. Drop them into simmering chicken stock and cook for 30 minutes, or until fully cooked and puffed, turning once. Remove and serve hot in chicken soup.