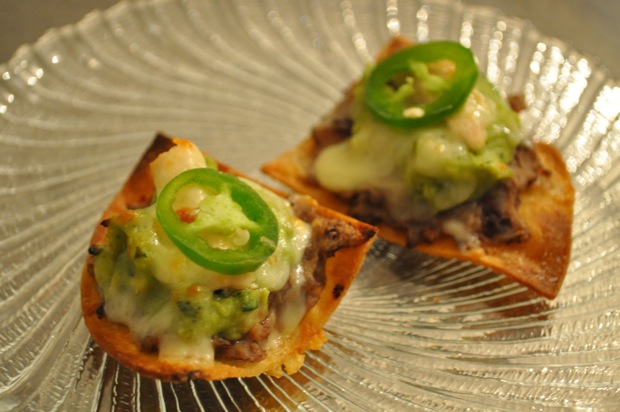 Ain’t gonna lie to ya, folks. This recipe is fairly time-consuming and involved. BUT…these babies aren’t even remotely related to your standard bar fare, and in our opinion, it’s more than worth it for scrumptious, over-the-top nachos that make you vow never to order pathetic “super nachos” at your local brew hall or chain restaurant again.

I’m waving good-bye to the two-thirds of you who will promptly stop reading when I reveal that you actually fry up your own chips from quartered corn tortillas. So ta-ta, and we’ll catch you next time.

Okay, you lone talented, bad-ass kitchen hottie: now that it’s just you and me, I’ll tell you the secret is that it takes literally five minutes to fry up a whole bunch of chips. I wound up frying two whole package of tortillas, because really, what was I going to do with leftover corn tortillas? I think the whole thing took 20 minutes. But you wind up with big, perfect, golden chips that you then build individually with the luscious and tasty toppings you make.

The black bean paste is to-die-for. My kids wanted to eat it with a spoon out of the bowl. You cook up some bacon, and then add to the pan canned black beans, onions, garlic, jalapeÃ±os and chicken broth, which you simmer to reduce and then pulse in a food processor. That’s the first layer that you spread on each chip. You then make a simple guacamole, which you dollop on top of the bean paste. Then a strip of chicken ““ the recipe calls for smoked, but I use plain steamed. Sprinkle with shredded Jack cheese, pop under the broiler for a couple of minutes and garnish with a slice of jalapeÃ±o. Ohhhh, baby! Each chip is a hearty, perfectly topped, savory treat.

If you’ve got the time and the inclination, I promise these will wow all who are lucky enough to sample “˜em.

For the bean paste:

First make the chips: Cut the tortillas into quarters. Heat oil in a large saucepan over medium heat until it is hot enough to make a piece of tortilla bubble vigorously. Using tongs, transfer a few tortilla quarters to the hot oil and fry for 30 seconds on each side, or until crisp. Drain on paper towels and season with salt. Repeat with the remaining tortilla pieces.

Next make the bean paste: Heat a large saucepan over medium heat. Add the bacon and cook until the fat has rendered and the bacon is crisp, about 8 minutes. Add the beans, onion, garlic, jalapeÃ±o, broth and salt. Bring to a boil, reduce heat to a simmer, and cook for 20 minutes, stirring occasionally. Remove from heat and cool for 20 minutes. Place the beans and the liquid in a food processor and pulse to a chunky paste. Season with salt and lime juice.

Make the guacamole: In a medium bowl combine the avocados, onion, tomato, jalapeÃ±o and cilantro. Mash with a fork until smooth. Season generously with salt and lime juice to taste.

Preheat the broiler: Spread each tortilla chip with the black beans. Add a dollop of guacamole. Portion the chicken on top of the guacamole. Top with cheese to cover. Place under the broiler and cook until the cheese melts, about 2 minutes. Place thin slices of jalapeÃ±os on each nacho. Serve with charred tomato salsa for dipping.

Yield: 6 servings as an appetizer