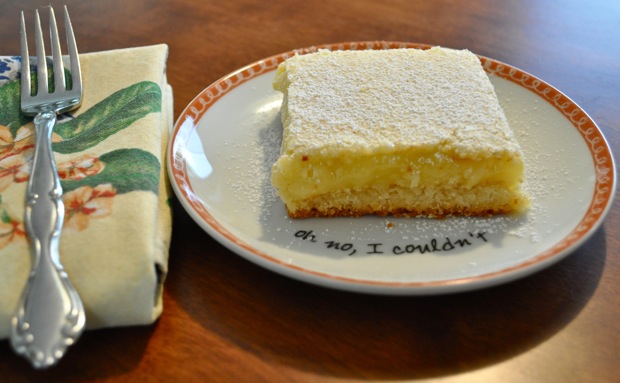 I love lemonade, lemon sorbet, lemon chicken, lemon pound cake and I’ve been known to suck on raw lemons since I was a little girl, but I’m not a big fan of lemon bars. There’s something just too sickeningly sweet and oozy about them that doesn’t appeal to me. However, I know other peeps don’t share my turn-off, and I thought they would be a tangy contrast to a platter of rich brownies I was bringing to a get-together, so I made a batch.

To truly make them correctly, you need more than a couple of hours, since you have to:

1. chill the dough for a while after you press it into the pan,

2. let it cool to room temp after you blind bake it, and

3. allow the whole thing to cool and set before you cut it into bars.

Pressed for time, I shamefully cheated the process by popping the pan into the freezer a few times, and it didn’t seem to be terribly detrimental to the result, according to the tasters.

So why was my soul so happy making a dessert I, myself, find mildly revolting? Because I got to use the mixer. And not my big, giant, brandy-new, fire-engine-red, 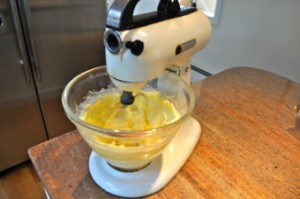 professional mixer. No, siree! I got to use the KitchenAid 3B. This baby was my grandmother’s ““ and before that, my great-grandmother’s. Manufactured somewhere between 1944 and 1953, this workhorse with the sturdy glass bowl still does graciously what she was manufactured to do more than 50 years ago! She currently lives in semi-retirement in a closet in my dad’s kitchen at the beach, although she doesn’t get trotted out too much anymore, as my dad ““ fabulous chef that he is ““ doesn’t bake. But when I’m visiting, I think up reasons to let her see daylight, and she never lets me down.

For some reason I always feel compelled to don a kitchen apron when I’m using the old gal ““ partly because she tends to kick back flour a little more aggressively than do modern models, and partly because I’m mighty sure my Nana Caila and Nana Sophie wore ’em when they baked, and it makes me feel an even stronger connection to them. I’m reasonably sure neither of them mixed up treats sporting shorts, a tank, a backwards baseball cap and flip-flops, and I guess out of modesty and respect for history I felt the need to cover up. I stopped short of pumps and pearls ““ it’s a little too “Warrrrrd? Is that youuuuuu?”

But sadly, after pulling the simple dough together in the mixer, you don’t need her services anymore for this dish. The ingredients for the lemon filling are easy to whisk together by hand, which Matt capably handled, and then you just need that hottie, Miss Oven, whom I don’t particularly care for nearly as much ““ I’ve been burned by her a few times…

I tried to speed up the final cooling process in the freezer so I could cut them and still be on time at our friends’ house, but I could’ve used another half hour, at least. The filling was still warm and a bit runny, so I had to take extreme care to get them out of the pan intact, and then sprinkle them with confectioner’s sugar ““ for a glam final touch.

The moment of truth? When a gang of kids descended upon the dessert table and two of them grabbed lemon bars instead of the lusciously fudgy brownies that were smiling back from a big platter. Their eyes lit up as they bit into the bright yellow bars, and they smacked their lips approvingly. I knew my Nanas would be pretty darn proud!