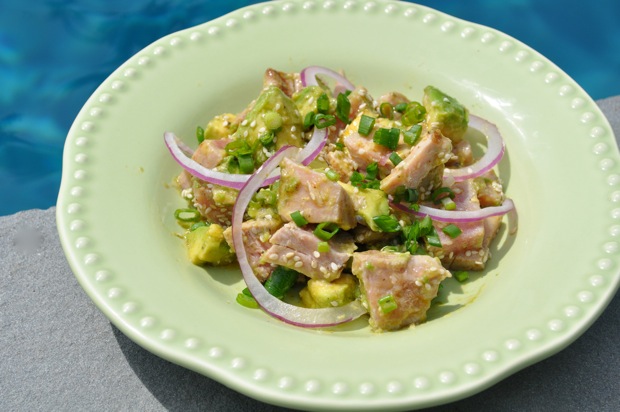 But first, I have to back up and tell you a new culinary rule I made up the other night: “do not sip cocktails and then have a soup course before you serve grilled tuna.” Because while you’re slurping soup, the tuna is sitting on a platter on the kitchen counter cooking way beyond an appetizing degree of doneness. (Without the preliminary cocktails, you may possibly have a shot at remembering to slice the tuna before you eat the soup, thereby suspending further cooking and preserving the perfectly seared outside and raw interior.)

The tuna wasn’t horribly inedible or anything, but after a filling bowl of scrumptious tomato soup-and next to glorious grilled corn on the cob, it wasn’t particularly appealing. To say the least, we ended up with generous leftovers.

And then somewhere in the cobwebbed corners of my dimly-lit brain, I recalled a Barefoot Contessa recipe for grilled tuna salad. Now anyone who has known me since childhood knows that I won’t go within 20 yards of a bowl of canned tuna fish mashed up with mayo. As a grade-school student, I subsisted exclusively on pb&j for lunch, and always placed myself strategically at the school lunch table depending on who had brought tuna nightmare supreme. But then I grew up and thankfully discovered the dazzling merits of grilled fresh tuna steaks, a galaxy apart from the repulsive canned form of the fish. (And because I associated mayo so closely with tuna, it took ’til adulthood for me to shed my squeamishness about the creamy condiment.)

Anywho. I chunked up the previously grilled, moderately overcooked leftovers with some ripe avocados, and tossed it all in the simple lime, soy, wasabi dressing with toasted sesame seeds, scallions and a few thinly-sliced red onions. Talk about Jeckyll-and-Hyde tuna-the same people who had politely dismissed the dinner entré the night before licked the platter clean at lunch the next afternoon! The raves and gasps of delight continued until well after the salad was gone, and my big crew of eaters kept retreating to the kitchen to salvage the less-than-pristine tuna scraps I had opted to leave on the cutting board.

All in all, a happy ending for an otherwise sorrowful tuna tale.

Brush the tuna steaks with olive oil, and sprinkle with salt and pepper. Place the tuna steaks in a very hot saute pan and cook for only 1 minute on each side. Set aside on a platter.

Cut the tuna in chunks and place it in a large bowl. Add the scallions and red onion and mix well. Pour the vinaigrette mixture over the tuna and carefully mix.