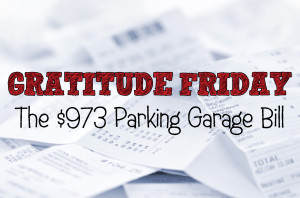 Sometimes an attitude of gratitude can carry you through the oddest, most aggravating stuff. This was one of those weeks.

The parking garage we always use in midtown Manhattan lost the key to our car. We had just finished an afternoon of meetings and appointments and were rushing to pick up the car (whom we’ve named Lady Victoria, by the way), so we could move her uptown before meeting friends for a celebratory holiday dinner at a fancy-schmancy restaurant. The key was nowhere to be found. They turned the place upside down. They looked in the key box. In the garbage can under the key box. In the dumpster. In every crevice of Lady Vic. In the car behind her. In everyone’s pockets. They called the guy who had parked her earlier. He didn’t have it, nor did he have any idea where it might be.

I was growing more frustrated by the minute, especially when our dinner reservation time ticked by and we were still in the stupid garage, 12 blocks from the restaurant. With no other choice, I changed my clothes right there in the back seat of Lady Vic on the first floor of the garage. Classy.

The on-duty manager told us to go to dinner and they would continue to look. He added that if the key didn’t turn up, we should make any arrangements we wanted to get home to Connecticut—50 miles up Interstate 95—and they would reimburse us for all expenses. An hour later, he called to let us know the key still hadn’t turned up.

First, the restaurant could not have been more accommodating or gracious about our being half an hour late. Everyone was sympathetic and eager to provide warm hospitality to make us comfortable. We even got a table visit from Chef Daniel Boulud himself. And our charming friends were most understanding. Dinner was lovely and the company was the best.

Next, we arranged for a car service to pick us up at the restaurant and drive us home. Of course, just to cap off the aggravation of the evening, the driver insisted on taking a “shortcut” on the Hutchinson Parkway despite our loud and vigorous wishes to the contrary. Our pleas to stay on route 95 were still hanging in the air when the driver veered onto the exit anyway—where we were promptly greeted by a solid red wall of brake lights. Apparently there’s a drawbridge on that section of the Hutch that probably opens, what, once a century? But of course it happened to be that night. So there we sat, stopped dead, for 15 minutes while the drawbridge did its thing. And further north, it’s just no fun if there isn’t night work for four miles through Darien and Norwalk. So that delayed us for another 20 minutes. We finally made it home just before we would’ve turned into pumpkins.

On the way home, we arranged for another car to pick us up at 7:30 the next morning to bring us back to the parking garage with our spare key. Luckily neither of us had anything pressing planned for the day, because a trip to the city is pretty much a day-killer, especially during the holiday season.

We ventured through morning rush-hour to the garage and met with the daytime manager, who had parked the car the day before, to put together a claim. Between transportation costs, reimbursement for the previous day’s parking fee and the cost to get a new smart key and reprogram the spare, the total came to $973.27.

Once we got back into Lady Vic, we discovered that we had a small issue on our hands. We had activated “valet mode” when we had left her the day before, and for some reason, the code we always use wouldn’t disable it. In valet mode, the nav and sound systems are inactive and the glove box is locked. A call to the dealer confirmed that the only way to fix this is to bring the car in to have it reset. Clearly we’re going to have to go there eventually so they can program new smart keys, but in the meantime we’re map-less and music-less. I know—worse things have happened. But still it’s annoying.

So that the unexpected round trip to NYC wasn’t a total loss, I thought we should turn lemons into lemonade by heading up to Zabar’s at 80th and Broadway to get some smoked salmon and cream cheese so we could make breakfast for dinner. It was a gridlock alert day in the city, so we had to deal with the hassle of snarled traffic all around midtown, and everyone we encountered was scowling and miserable. While stopped at a light near Zabar’s, we saw an open parking spot up ahead. But before the light could turn green a van pulled onto Broadway in front of us and snatched it. Then I spotted a car pulling out of a space up the block. And of course a tractor-trailer immediately pulled up next to the space to block it. We finally found a spot behind a Fresh Direct truck being unloaded. We motioned to the guys that we were going to park behind them and they shrugged as if to say, “Whatever, asshats. But don’t expect us to move our hand trucks out of your way anytime soon.” We were tired and cranky, and it felt very much like Andrea’s Terrible, Horrible, No Good, Very Bad Day. All I wanted was for someone to be a little nice to me.

Finally stepped inside Zabar’s. It was like a magic elixir. There’s a calm nostalgia at the appetizing counter, and our favorite fish slicer, Jerry, came out just in time to slice our smoked Scottish salmon, sable and sturgeon. He handed us generous slices of fish over the counter, and I couldn’t help but smile at being transported away from the misery lurking just outside the door. When we left, I was smiling and relaxed and everything fell back into perspective. Crazy people that we are, we took another 45 minutes to traverse Manhattan at a snail’s crawl in pursuit of fresh, hot bagels on Third Avenue. At least dinner shopping was complete.

1. While it was a first-world inconvenience of a colossal order, no one was harmed or hurt, Lady Victoria was fine, and we were able to make it home to our warm, comfy bed and back to the garage safely.

2. I have a car to drive in the first place!

3. We got to forget about the ordeal for a while over a fabulous dinner and focus instead on friendship, success and laughter.

4. Yes, it was a hassle to schlep back and forth, but we were easily able to snag car service reservations.

5. We are fortunate to have been able to absorb the charges for travel and key replacement, and we’ll eventually be reimbursed for all the out-of-pocket expenses resulting from this debacle.

6. The late night/early morning and the unexpected trip to the city made us draggy and grumpy, but I kept reminding myself of SOOOOO many worse things that could’ve altered our plans for the day instead. And a good night’s sleep is a simple panacea.

7. I got to have an unexpected visit with the slicers at Zabar’s, which is always an uplifting treat.

8. I’ve been completely out of dinner ideas lately, and that was solved with a yummy no-work meal of smoked fish and fresh bagels.

9. Although they lost the key in the first place, the guys at the garage were very helpful and I imagine they’ll take extra-good care of our cars in the future.