Gratitude Friday: A Secret Cure for the Crankies 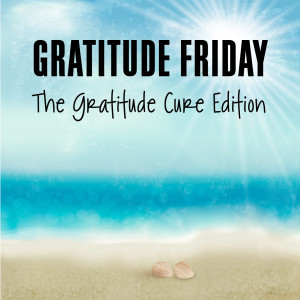 This week I stumbled on a quick, effective cure for a case of the crankies: expressing gratitude. Yup. I was spending time at the beach with someone who was wasting a beautiful day and sublime setting by complaining about literally everything under the sun. After a while, I had no patience for listening to the silly self-imagined misery any longer, and I interrupted him. “Hey, I have a question for you,” I began. “Can you name three things you’re grateful for?” Instantly, his tone softened. “Well, sure,” he said, launching into a  list that went far beyond three items. By the time he was done a few minutes later, he was relaxed, laughing and realizing that he had been silly to grouse about petty annoyances.

I’ve had similar success with the gratitude cure when family members have been in a funk. Everyone gets grumpy once in a while, but when a full-on case of the self-pitying blues doesn’t subside for a couple of days, I ask that person to send me an email every night for a week listing at least three things they’re grateful for. Often, doing it just once is a panacea, but within two to three days, the person has a completely different perspective and the blues magically disappear.

Give it a try next time you or someone you know is feeling irritated, gloomy or prickly, and let me know how it goes.

So what am I grateful for this week? Here goes:

>> The perfect cozy, rainy summer day, complete with dark skies, heavy rain and rumbles of thunder. We spent the day at home with classical music wafting throughout the house, everyone thrilled to hang out in soft, cuddly sweats. For lunch, we savored yummy take-out: scrumptious clam-filled chowder and buttery lobster rolls from The Lobster Roll, the purported inventor of the classic summer dish, just down the road. And in true itsy-bitsy spider form, by dinnertime, out came the sun and dried up all the rain.

>> I got to do The Hustle with my sister and teach it to her daughter! Granted, I’ve discovered it’s not officially The Hustle, but rather a simplified dance version we learned in elementary school phys ed. Nonetheless, as soon as we heard the familiar voices of Van McCoy and the Soul City Symphony commanding us to “DO IT!” coming from the living room, my sister and I jumped up and dutifully complied. My eight-year-old niece picked it up immediately, and outshone us two old ladies. And sorry, there’s no video of this dancing debacle!

>> My dad called me twice this week for long cocktail-time phone conversations. He’s not historically a chatty phone guy, but when you can manage to hook him at cocktail hour, it’s the best. We catch up on everything, and laugh and joke about things that only Cohens find funny. I treasure these phone calls.

>> Big burst of creativity and productivity this week. Huge. Such an energetic shot in the arm. Coincidence that I started exercising a couple of weeks ago? Hmmm…could be!

>> Really honored and excited to be a Featured Blogger on Huffington Post Parents this week as they published one of my favorite pieces of writing: “15 Back-to-School Questions To Ask Your Kids.” So happy to share with HuffPost readers some tips I’ve developed over the years to help my kids hit the ground running as they begin a new school year.

>> Well, all the stars must’ve been aligned, because I achieved the tremendous coup of capturing our holiday card photo quickly and painlessly! Every year we send out a photo card of the boys, and every year the gang rolls their eyes and bellyaches about having to pose for my camera. You’d think that by now—in their mid- to late-teens—they’d finally yield and try to behave during our shoots. You’d be wrong. Last weekend I gave them a heads-up that this week we’d need to get our photo, since the oldest leaves for college next week. The grumbling began forthwith. But that very night on our way out to dinner, I decided to grab my camera on a whim. And with the light just right and all the boys looking neat and handsome, I did my shoot. In fact, they were enjoying it so much they each asked for individual portraits. When we looked at the results, we all miraculously agreed on a particular shot for the first time ever. They’re thrilled to be done, and I’m thrilled to have my card ready to roll.

>> Two picturesque sunny afternoons at the beach with my gang sitting all in a row. Such a quintessential summer memory to look down the row at these perpetually peripatetic guys just relaxing, listening to music or involved in a book. Love seeing them quiet, still, recharging for many exciting things to come, no doubt.

What’s something you’re grateful for this week?