Anything I’d write on this Gratitude Friday would seem trite compared with the words my oldest son wrote yesterday after sheltering in place at the U.S. Capitol. A college freshman, Ben is an intern in the office of Congressman Tim Griffin from Arkansas, and because he’s unpaid, his help is greatly appreciated during the shutdown that has furloughed most Congressional staffers. Ben was on the street outside the Capitol when yesterday’s shooting occurred, causing the area to be placed on lockdown.

I am tremendously grateful that he was safe and unharmed—and that he kept in touch with me throughout a particularly frightening hour of his life. With Ben’s permission, here’s his story. 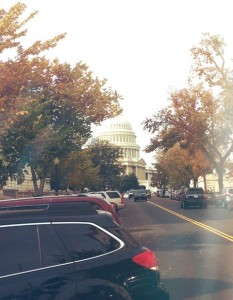 THANK YOU to everyone who wished me well today. Yes, I was at the Capitol for my internship, but I’m back on campus and safe now. Just wanted to share my story, if anyone’s interested, and express gratitude for my safety.
I was doing what I do every Thursday around 2:15—walking up Independence Avenue to my office building, talking to my mom on the phone. When I was just a block away from my building, I saw hordes of police cars and policemen speeding in the same direction. This wasn’t too unusual; it often signals a presidential motorcade making its way through.

It was when the officers with machine guns came out that I knew something was wrong.

Police officers started hollering at civilians on the streets—which included other congressional staffers, lobbyists and even tourists—and urged us all to run to the nearest building. Absolute pandemonium. Swarms of everyday people ran past me before instinct kicked in, and I joined within the massive group.

As my heart pounded, my mind started racing when someone in the group uttered the words I didn’t want to hear: “Shots fired.”

The group ran into the Rayburn House Office Building, right next to the one I normally work in. Everyone went through the standard security checkpoint, but this afternoon, officers stood at the doors, holding them shut when no one was entering. After I went through the metal detector, I joined a group of fellow staffers heading to the third floor of the building. Walking down the hall, people were physically pulling others into their offices and locking the doors.

I somehow got pulled into the office for the Committee on Science, Space and Technology with several other visibly rattled workers. I felt fortunate to be receiving texts upon texts from concerned family and friends, although my hands were shaking uncontrollably. On the bright side, a guy started giving out Hershey’s Kisses—always appreciated in emergency situations.

The two TVs in the office were on Fox News and CNN, and showed images of officers rushing down the exact same block of Independence that I had just walked up. That’s what struck me the most. It was all too real.

I sat with about a dozen other people whom I didn’t know in that office before the lockdown was lifted about an hour later. I took a deep breath as I walked out of the office, all too aware of my surroundings.

I checked in with the staff in the office where I work, and all safe. My priority was to get back to campus, though, so I thankfully grabbed a cab and made it back to Georgetown.

So grateful to be safe. Although I probably couldn’t have picked a busier time to work on Capitol Hill, I’m also thankful to have had these crazy, unique experiences. Please keep the officers who were affected in your prayers for now. And, as always, God Bless America.