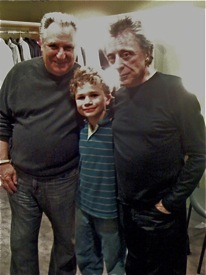 As our family gathers in Rhode Island today to celebrate Thanksgiving 2007, I want to take the opportunity to give thanks for something particularly special to us. Yesterday marked the fifth anniversary of Matthew’s cochlear implant, the miraculous device that has given him the ability to hear, and consequently develop speech and language. His progress over the five years has been extraordinary, and today he is a successfully-mainstreamed third grader, doing extremely well academically and socially.

We are ever-grateful that the technology even exists to begin with, and we give our most sincere thanks to the professionals who have helped change Matthew’s life to a hearing one: the surgeon and medical staff at NYU; his audiologists; his speech/language pathologists and therapists; teachers and teaching aides; and many wonderful, patient, encouraging friends who have cheered him on along the way. Matthew has never let his hearing challenge get in the way of enjoying any part of life to the max, and God bless him – he’ll tell anyone who will listen that he’s “going to Hollywood to be a famous movie star.” And I believe him.

So did we do anything special to commemorate the anniversary? Well no, not intentionally, but suffice it to say I think it will be a day Matthew will never forget.

A few months back I got tickets for the whole family to see Frankie Valli and the Four Seasons last night at the Rose Theater at Time Warner Center, part of Jazz at Lincoln Center. We have been obsessed with their music since we saw the phenomenal Jersey Boys last December, and both Frankie’s original music and the Grammy-winning cast album are still in frequent rotation on everyone’s iPods. I thought it would be a fun way for the family to kick off the Thanksgiving holiday weekend, and truthfully it never dawned on me that it was a special day for Matthew.

We had a quick afternoon trip into the City, shopped a while, and had a delicious dinner at Tao before heading to the show. I was awed by the amazing Rose Theater, an intimate showroom designed specifically to enhance the beauty of live music – quite the antithesis of Madison Square Garden where we’d seen Stevie Wonder not a week before.

The show began with “special guest Stewie Stone” – a Borscht-Belt comic in his late-60s who has been opening for his best friend, Frankie, since 1973. His schtick was cute, mostly-tame, self-deprecating Jewish humor, and in his act Stewie talked about the fact that he married a woman, divorced her, and remarried her – “because I like to stay close to my money.” (Ba-dum-bum!)

Then Frankie, 73, (and no higher than my knee) and four very young, very handsome Seasons came on and proceed to do a nice job performing 15 or 20 or so songs from the group’s massive catalog of hits. Frankie continually encouraged the crowd to dance and clap and sing along – whatever made us feel good and have fun. It wasn’t hard for me to clap and sing along when I knew the words to every single song, dating back to my early childhood and spanning a good deal of my lifetime. But the one who got really caught up in it was Matthew. His seat was on the center aisle, and he barely sat down all evening. He was dancing and swaying, imitating to a tee the motions of the Four Seasons. Though he doesn’t know the real words, he moved his mouth anyway, and he was completely lost in the excitement of a live musical performance.

All of a sudden during “Can’t Take My Eyes Off of You,” the 60-ish woman sitting two rows behind us sashayed down to the dancing Matthew and asked if he’d like to go up to the stage to shake Frankie’s hand. We were sitting only a few rows from the stage, so they walked the short distance down the aisle and sure enough, Frankie reached down and shook Matthew’s hand. Matthew was absolutely floored when he returned to his seat, and told me with sheer amazement that he was never going to wash that hand again! The lady winked at me and I thanked her.

Next thing I know, she moves to the empty seat behind me and leans forward to ask if I’m Matthew’s mother. I tell her I am, and she asks if I thought Matty would like to meet Frankie backstage after the show. Heck yes! She told us to hang out after the show and she’d come get us.

The encore ended on a high note with “Working My Way Back to You”, and as soon as the house lights came up, women from all different parts of the theater made a beeline for Matthew. They all wanted to tell him how much they loved his dancing and how adorable he is, and of course, touch his hair. One woman said, “You absolutely made the whole evening. You are a very special boy!” None of us had had any idea so many people were watching him, and all these women just had to take the opportunity to meet him and chat with him for a few minutes. They all had huge smile and wished our family a wonderful holiday.

Matty didn’t know what had hit him, but he lapped up the attention and greeted his “fans” with his innate charm. “Wow!” he exclaimed, “I’m a pretty popular guy tonight!”

He was bowled over when I then told him he was invited backstage to meet Mr. Valli. The nice lady came to get us, and we all followed her to the backstage entrance, along with a few other people she had collected from the audience. The comic, Stewie, greeted us all at the door and told us to go into the Green Room, and he made the rounds, shaking all the boys’ hands. We weren’t sure what was going to happen, when all of a sudden the woman grabbed Matty by the hand and told him and me to come with her to Frankie’s dressing room. On the way she introduced herself as Stewie’s wife, Frani (which is what I had assumed). Stewie and Frani introduced Matthew to Frankie, and Matty extended his hand to shake Frankie’s. Frankie is even tinier in person, and could fit under glass in the corner of my desk. He and Matthew chatted for a few minutes, Matthew expressing his love of the show and the music, and Frankie thanking him and asking us about Matt’s hearing. I told him a little more about Matty’s implant experience, and it dawned on me right there that it was actually the 5th anniversary of the implant activation. Wow – what a way to celebrate! Frankie asked where Matthew had been treated, and then showed Matthew his own hearing aids – not the molds he wears on stage to perform – but real hearing aids because he has suffered degeneration of the stapes bone. He shared with us that he has had three surgeries at the House Institute in Los Angeles, and said he would be more than happy to set us up out there if we thought they could do any more for Matthew. He then gave Matthew a huge hug and signed Matthew’s playbill. I asked if it would be okay to take a photo so Matty could have a memory of meeting a legend. (That’s Stewie on the left.) He said that Matthew was a special new friend – “you’re part of my crew” – and that Matthew was welcome backstage to visit anytime he came to see Frankie again. Frani gave him a big kiss on the cheek.

Matthew was in utter disbelief that this was all happening! We thanked everyone and went back out to the Green Room to see the rest of the boys and David and tell them about our meeting. We all waited a few minutes for Frankie to come out and do a “meet-and-greet,” and in the meantime he had his manager give a copy of his new CD, “Romancing the ’60s” to Matthew. When he came out of his dressing room, he came right over to Matthew and put his arm around his shoulder, and Matthew did the same. Matthew said, “I’d like you to meet my family,” and proceeded to introduce his new celebrity friend to his brothers and his dad, and we got a group photo, before thanking everyone and emerging from the backstage area.

We were all nearly speechless about what had just happened, and as much as his brothers claim to “dislike” Matthew, he was their hero last night and they couldn’t deny it. Without that mischievous imp dancing in the aisle, we would never have been invited backstage. There’s just something about the twinkle in his eye that attracts people…and I hope it gets him as far as his dreams will take him.

And so while today is a day set aside to remember to give thanks, you can see why we give thanks every single day for the miracle of hearing that has been bestowed on our littlest boy. Being able to dance to the music – and being able to tell a legend how much you adore his work – is one of the most beautiful blessings.