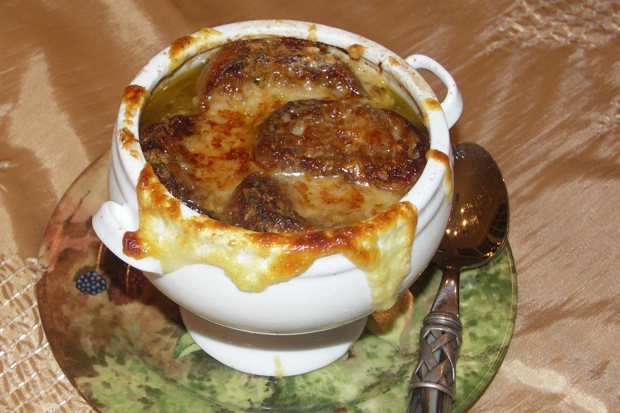 I was the envy of the two nice sales ladies in Crate & Barrel one cold afternoon last week when I went in to pick up some oven-proof crocks. “Are you making onion soup?” they each asked dreamily, letting out a longing sigh when I confirmed that I indeed was. They gave me their sincere wishes for a wonderful dinner as they sent me on my way, crocks wrapped up cozily in the big white bag, visions of toasty Gruyere dancing in their heads.

French onion soup is hands-down one of my top five favorite dishes. Let me clarify that. Good French onion soup. I remember ordering it as a little girl whenever we went to the Barnsider, as far back as the days when it was in the Midland (er, Rhode Island) Mall. They once told me their cheese secret: they used to grate three kind of cheese, roll it all out together with a rolling pin, and cut out big circles to place on top of the crocks. In high school I vividly remember making do with Farroba’s onion soup, into which she dropped tons of shredded mozzarella cheese that you’d scoop up from the bottom, all long and elastic-y. (Between that and the cream cheese brownies, I swear it’s a wonder I could fit through the doors of Wheeler Hall). I graduated to the very fine soup downstairs at the Pot au Feu, which was slightly thick and sweet, with swoonfully melted crispy fromage atop their yummy bread.

I’ve made many onion soup recipes over the years, trying to find just the right balance of sweet and savory, brothiness and stewiness. When you hit it right, there’s nothing more satisfying. And ever since I found Thomas Keller’s recipe, I’ve seemed to be able to hit it right or pretty damn close every time. The key is to slow-cook the onions so they caramelize. He does it for five hours using a diffuser. I do it for about half that time, using a big roasting pan I put over a low flame across two burners so I can fit the onions in one layer rather than have them sweat and steam. He makes his own beef stock; I buy mine, and admittedly the flavor varies depending on the brand. He gives very precise instructions on how to cut the onions; I follow the directions to a tee. And I am the luckiest girl in the world that onions don’t make my eyes tear (thanks, contact lenses) because for this last batch I had to peel and cut 16 of ’em. The secret ingredient that makes it taste oh-so-good? A few drops of sherry vinegar at the end. Adds just a touch of acidity that makes all the difference.

This particular batch wasn’t the best ever, largely because I ended up using about four different brands of beef broth. I really need to figure out which brand tastes best and stick with that, but I had some old boxes in the pantry and figured I’d throw them in with the kind I had just bought at the store. Someday I will actually make my own beef broth. It’ll be the same apocalyptic week I put all the photos in the boxes upstairs into albums and catalog my DVD collection.

In the meantime, the Reiser boys are more than happy to excavate the crusty Comte and toasty baguette rounds to uncover some pretty decent onion soup. And that’s good enough for me on a cold winter’s night.