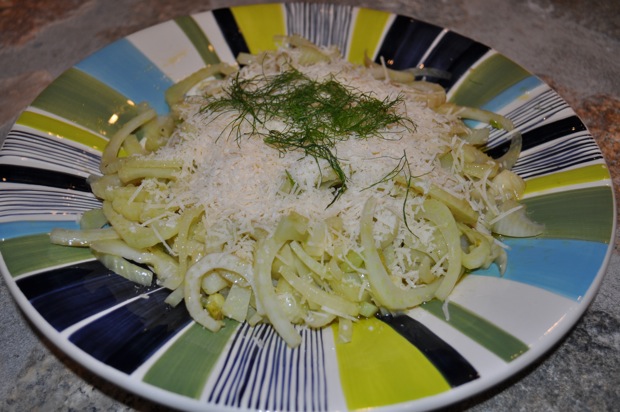 I’ll just come right out and admit that I heart fennel. This is somewhat baffling to me, since I absolutely abhor licorice, and if you come within 20 feet of me with a disgusting box of Good n’ Plenty, I’m likely to throw a shoe at you. What that tells me, though, is that fennel doesn’t taste like black licorice ““ or at least what bad black licorice candy tastes like.

Fennel gets a bad rap. Since it doesn’t trot out of the produce department with nearly the same frequency as veggies in hot contention for Miss Popularity ““ say, tomatoes or cukes ““ supermarket cashiers are often stumped by the frondy white-green bulbs. More than once I’ve been asked if it’s bok choy…which, uh, no. Not even close. Then, often, the name “fennel” isn’t in their little produce code cheat sheet. So they look, but don’t find it, and look to me quizzically to help them solve their little produce mystery. Some know to look under “anise,” but most don’t want to pronounce it. I guess it makes teenage cashiers giggly to say, “ANN-iss,” so frequently they’ll ask, “Is this “˜uh-NEECE?” I’ve even had cashiers and customers in line with me ask what you do with fennel, and I stand there like the fennel ambassador, touting the virtues of the raw and the roasted, the umami magic parmesan cheese adds, the fact that it isn’t licorice-y, especially when caramelized in the oven.

Fennel is a standby veggie for me; I always keep a bulb or two in the fridge. Whip out the mandoline, slice it super-thin, add a squeeze of lemon or orange, a drizzling of good olive oil, some shaved parm and halved heirloom cherry tomatoes when in season, and you’ve instantly got a refreshing, crunchy salad for lunch or dinner. Cut it in chunks, toss with olive oil, roast at a moderate heat for 40 minutes or so and you’ve got one of the sweetest, most comforting, warm veggie dishes around. Again, grate a little fresh parm on it when it comes out of the oven ““ or not. Rewarding either way.

So what’s the problem with Ina’s fennel salad? In a word, it’s noncommittal. Straddles the line between raw and cooked. And not in a particularly appealing way for me. Ina prefaces the recipe by saying she isn’t crazy about raw fennel, but she likes it cooked. So what she does here is sautès it for 2 to 3 minutes so it’s translucent and cooked slightly but still al dente. Sadly, this took all the crunchy, fresh goodness out of the raw fennel, but didn’t remotely approach the caramelized sweetness you get when you roast it (how could it possibly?). Talk about wishy-washy. Plus I didn’t even get to use my mandoline.

We did make all-gone ““ because, really, what’s the point of shunning a couple of perfectly good bulbs of fennel? ““ but this isn’t a recipe I’ll repeat. I’ll stick to the raw or the roasted, thankyouverymuch.