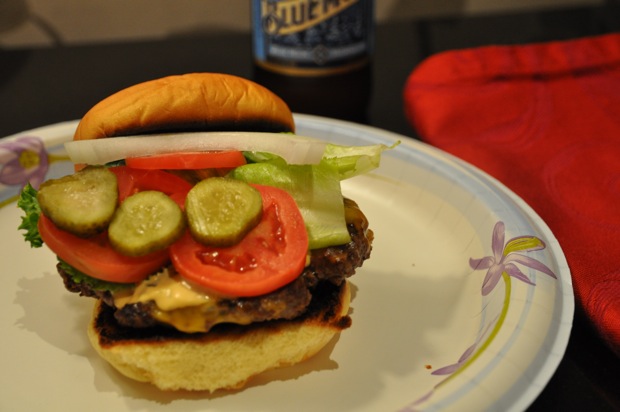 In honor of this week’s monumentally exhilirating announcement by Union Square Hospitality Group that Shake Shack will open its “first true roadside Shack” right here in Westport, CT-just a mere mile from my abode-I had to wax poetic about one of the dishes that’s been in my backlog for a few weeks now: the fake Shack Burger.

Full disclosure: the Reisers are completely obsessed with Shake Shack. The burgers have just the right juice/grease combination, the rolls are smushy and delish, the lettuce and tomatoes are fresh and pristine, the fries are crinkly and always hot, the custards rock, and the root beer is creamy, cold, and not overly sweet. Happiness is BenRei eating a cheeseburger at Shake Shack. 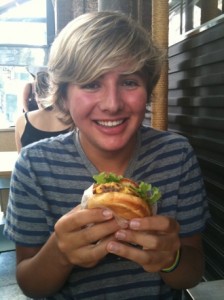 So enamored of those burgers is he, that he found this recipe online, and I must admit it comes mighty close to mimicking the yumminess of a true Shack Burger.

The first requirement is that you politely ask the butcher to grind you just the right combination of beef. The formula calls for half sirloin, a quarter chuck and a quarter brisket. My butcher didn’t have brisket last time, so he substituted skirt, which apparently comes from some area pretty close to the brisket. Even with this substitution, the burgers turned out terrific.

The second trick is to form the ground beef into “pucks” that initially look too small to be burgers. The secret is that when you cook them (on a griddle or pan-not the grill!), you smash them down with a spatula, making these perfect-sized patties, and forming a yummy crust. Couldn’t be easier.

Cheese? Plain old American. Lettuce and tomato? The fresher the better. Buns? Martin’s potato rolls. Shack sauce? Simple things you already have in your fridge and pantry. They couldn’t be easier to make, or more satisfying to eat. The only thing that’ll stop me from making fake Shack Burgers is having the real deal right down the road-as incredibly dangerous as that’s gonna be!