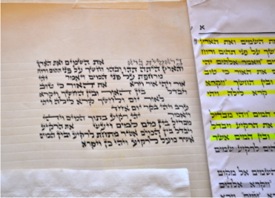 I promised myself that since I’ve been writing furiously about food all month on the other blog, I wouldn’t blather on about life here unless something extraordinary happened.

Well, yesterday it did.
Yesterday was possibly the most thrilling and fulfilling day of my Jewish life.
Yesterday I wrote a Torah.
You see, some people join country clubs wherever they move. We. Join. Temples. Yes, we currently belong to three houses of worship in three different states—and we only recently lapsed our membership at a fourth, on Nantucket, since we don’t expect to return there in the near future.
But as soon as we move to a new community, we make introductions at the local temple, and our summer location was no exception. To-do list for the first week in Amagansett: get beach parking passes, find liquor store, join the temple. It’s called the Jewish Center of the Hamptons, and it’s a “Reform-ative-odox” congregation (hee!) according to the cantor, here in East Hampton. The Norman Jaffe-designed sanctuary is one of the most intriguing places I have ever visited, although our worship this summer has consisted exclusively of Shabbat on the Beach, with our feet in the warm sand and the waves crashing behind us.
Well, the congregation is celebrating its 50th year, and to mark this jubilee anniversary, they are commissioning a new Torah. Members have been invited to participate in learning-writing sessions with Torah scribe Sofer Neil Yerman, and David and I felt it would be a once-in-a-lifetime opportunity—honor, really—for the boys and us to see our future through our past.
According to Jewish tradition, there are 613 commandments, the last one of which is to write a Torah:
“And now write this song for yourselves… And teach it to the children of Israel.”
–Deuteronomy 31:19
As Sofer Yerman explained to us and the other two families at our session, if even one of the exactly 304,805 letters in a Torah is not perfect, the Torah is not complete. Therefore writing even a single letter is considered as though writing a whole Torah.
The congregation is helping write the very beginning of the Torah, B’reisheit, and there have been writing sessions throughout the summer. The part we wrote was where God creates the heavens. We each held the feather quill as Sofer Yerman wrote a Hebrew letter—David, Ben and Jake wrote the mem, ayin and lamed in the word “m’al”which means “above,” and Zack, Matt and I wrote the lamed, resh and kuf in “l’rakia” which means “sky.” We went up in random order, not knowing which letter we would be writing, and found it more than coincidental—almost mystical as a matter of fact—that our twins, Jake and Zack, each wrote a lamed.
I also don’t believe it was simply happenstance that we wrote that particular phrase. “The skies above” was like a sunny embrace from our dear, departed loved ones. It was their hands touching our hands touching the hands of future generations. L’dor vador…from generation to generation.
The soulful, spiritual connection I felt to the past and the future was transcendent and breathtaking. It’s impossible to put into words, even for someone who is not frequently at a loss for them. It was at once joyous, powerful, profound and thought-provoking in a most complex and exquisite way.
As is tradition, the new Torah will be joined to the community at a jubilant wedding celebration under a tent later this year. If I’ve ever cried at a wedding, it shall be this one.