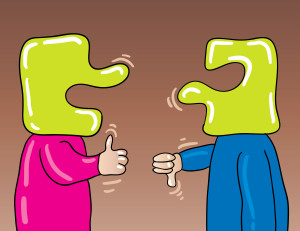 The stuff I read in my social media feeds and on online comment boards is driving me crazy lately. There’s a perilous level of contentiousness, with people weighing in passionately and angrily on a number of issues in the news. There’s bashing and name-calling and vitriolic snark. It’s all pretty scathing and uncivil.

And believe it or not, none of it has to do with politics.

This week alone, the three big issues being hotly debated in my feeds concern Jay Leno/Jimmy Fallon and The Tonight Show, the death of Philip Seymour Hoffman and allegations against Woody Allen.

Now, I don’t have personal connections to any of these celebrities, but by the fervor with which people preach about them, apparently many others do. Because why else would someone spend time and a lot of negative energy trying to score points defending or criticizing someone?

“What’s there to debate about Jay Leno and Jimmy Fallon?” you ask. Plenty, evidently. Opinions of Jay’s Tonight Show departure on social media range from him being called “a class act” to a “sneaky, conniving, backstabbing thief” to “…a woefully insecure, mediocre talent who should have thanked NBC for making him a rich man.” Comments on his successor include, “Fallon is amazing and way more talented!!!!” to “Fallon is worst idiot on tv so good luck NBC.” And, of course, the discussion is never complete until someone jumps up and down about the utter irrelevance of The Tonight Show, or throws in something about Conan O’Brien. Wow. Pretty impassioned spewing about something no one’s required to watch in the first place.

I’m admittedly not a regular late-night TV viewer. I don’t know Jay or Jimmy personally. I’m not privy to the business decisions behind their careers, nor of Conan’s. So maybe it’s just me who’s wondering why any of it is worth squabbling about. What’s the ultimate outcome? Why do we feel the need to have the last word, and to ferociously take down those who don’t agree with us when it’s ultimately not going to change anything? Don’t most of us have bigger fish to fry than, say, debating the comedic talent of Jay Leno? And if we don’t, then can’t we find something more helpful and uplifting to fill our spare time than bickering about relatively inconsequential stuff like people we don’t know? Isn’t it just less aggravating to change the channel or turn off the TV if you hate Leno?

Finally, even if you can’t stand the guy, can you honestly argue that a farewell like this is a terrible thing?

As I mentioned, Philip Seymour Hoffman and Woody Allen were also controversial figures in my social media feeds this week. Folks have been arguing both sides of the issues of drug addiction and sexual abuse allegations with staunch conviction — as if they know first-hand all the sordid, private details of both cases. The accusations about and defense of these celebs are vicious. Yes, we may somehow relate to certain issues brought to light by famous people in the news. But none of us knows the actual facts behind the scenes, so how can we passionately criticize or support these literal strangers with familiar faces? There’s usually his side, her side, each of their publicists’ sides, and then what really happened — which we’ll never truthfully know.

I suppose it’s a contemporary cultural pastime to argue and opine about everything under the sun, from Bravo housewives to Coca-Cola ads to Justin Bieber’s behavior. But really, to what end is all this vigorous, antagonizing debate? If we feel so strongly about the issues or the characters involved, isn’t it within our purview — and, frankly, in our significantly better interest — to do something useful and meaningful to promote a different culture or atmosphere? We can scream nasty stuff from the rooftops all day long about things that piss us off, but all that does is raise our blood pressure, underscore how many things are wrong with the world, encourage chasms of deep divide, and waste a lot of energy that could be spent on solving problems. It’s useless, negative and the antithesis of gratitude.

By the way, I’m not sure why we expect more or better or different from Congress. Our representatives are elected by us, and whether we like what we see or not, as a body they genuinely reflect who we are as a population. If we as individuals can’t help but focus on our polarizing differences all the time — even on stuff as petty as Jay Leno — why would we hold them collectively to a higher standard? We’re all human, and when it’s so culturally acceptable to argue rancorously for sport rather than bridge solutions and compromises, it’s no wonder we’ve got legislative gridlock.

What a difference we could make to fix real things that are wrong with the world if we stopped the divisive contentiousness and instead looked for common ground. Tried to find small things that bring us together rather than things that tear us apart and enrage us. Looked at our lives gratefully and treated each other with civility. Accepted that no one wins — in fact, we all lose — when we try to yell the loudest to change someone’s mind, yet we take no action.

Let’s strive to be better than this. To be kinder. To be more optimistic. To be thankful. To make a meaningful, positive difference. To steer clear of land mine subjects and not to take the bait in making even the most benign things divisive.

As a first step, take a look at your social media footprint. Are you trying to drag people down or lift people up? By and large is the tone of what you post indignant, inflammatory, designed to spark outrage? Or do you tend to share more inspiring, funny, helpful things? If something makes you laugh, smile or think, chances are it’ll make others laugh, smile, or think too. But if something infuriates you, don’t just shove it out there with a disgusted “Can you believe this?” kind of comment. Do something about fixing it in your own little way! Tell people what you’re doing to help and how they can help if they, too, are so inclined.

There’s a lot wrong with this world. But if we all just rant and argue about every little thing, none of it will ever get any better.

One Response to “Divided We Fall”