It Doesn’t Take a Village; It Takes a Family 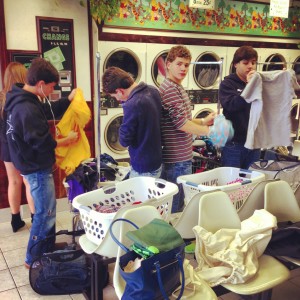 Earlier this week, my oldest kid had a college interview with an alumnus who lives in town. It had been snowing for like 10 hours already, the roads were slippery and all after-school and evening activities had been cancelled, so Ben agreed to let us drop him off at the guy’s house and come back a while later to pick him up. (As he said when he came home earlier in the evening, “It’s not the driving that’s bad, it’s the stopping!”)

We were in the car waiting for him in the guy’s driveway an hour or so later, and when the front door opened, not only did Ben amble cautiously down the 10,000 snow-covered steps in the freezing rain to the driveway, but the guy did too. David lowered his window, and the guy said, “I just had to come down and tell you what a great kid you have. I really hope he gets in. He’s a super, super kid.”

He then proceeded to tell us that he had asked Ben what he likes to do in his spare time, and among other things my kid mentioned, he said that he likes to spend time with his family. The guy was startled by Ben’s response.

“I thought that was amazing, and I asked him if he could give me some advice about getting my kids to want to spend family time together.”

He explained that he’s got two children, and the older one, a middle schooler, has already started to push back about spending time with the family.

“So however you’ve done it,” the guy concluded, “you’ve done a really good job.”

We thanked him profusely for the lovely, heartfelt compliments about Ben and about our family, and drove off into the slushy night.

And there you have it: Family’s what it’s all about.

We just spent eight days together as a family in the cold, dark wake of Hurricane Sandy, and while it was inconvenient and unpleasant at times, we had a blast. We made the most of it, working together to scavenge food and cook meals, to keep a fire in the fireplace so we could stay warm, and eventually to relocate when it was simply too cold to stay in our house any longer. We spent an afternoon together doing our laundry at a coin-op in the next town over, we played countless games of Yahtzee and Trouble to pass the time, we gathered around tiny iPhone screens to watch live streaming Fox News in anticipation of the election, and most of these strapping lads set up camp and slept on the floor of the room adjacent to our bedroom so they could cuddle for warmth and be closer to Mom and Dad in the creepy, silent darkness.

We rallied. And we really had a memorably good time as a family despite the circumstances. We’re a team. Always have been. Each of us rocks on our own, but together, we’re a force filled with love, with support, with laughter, with tenacity, with unvarnished honesty, with determination, with resilience, with conviction. We’re solution-oriented — we discuss issues and circumstances, setting goals and plans together. We’re strong survivors.

Sadly, it’s clear that happy, loving, intact families like ours are in the minority these days. We’re publicly mocked in current culture and sneered at as being corny, quaint, passé. But I never lose sight of the fact that mocking is most certainly rooted in envy. We saw it on the biggest stage during the presidential election: viciously obnoxious barbs about the beautiful, classy, loving Romney family. It was sickening and offensive to endure. Oh, how Mitt and Ann would’ve made a glorious first couple and perhaps returned some elegance, refinement and grace to the White House and the country overall. But instead we’ll slip further down the disgusting path of ignorance, entitlement, vulgarity. I’m sure the Founding Fathers would be so very, very pleased.

But make no mistake: I’ll withstand the mocking forever. Because I’m a Conservative mom, and family’s all I’ve got. I’m genuinely proud of it. And so, apparently, is my awesome Conservative kid.

2 Responses to “It Doesn’t Take a Village; It Takes a Family”