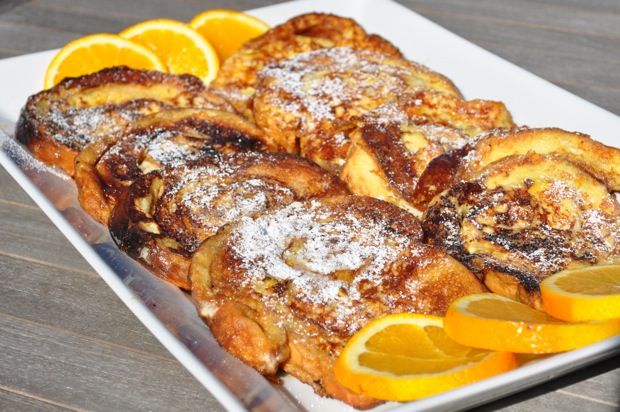 Growing up, french toast was our Saturday night dinner treat. My folks usually had evening plans, and while mom was getting beautified with her handy-dandy bonnet hair dryer with the hose, dad would handle the rowdy, hungry supper crowd. His go-to dish ““ and our fave ““ was Daddy’s French Toast. (Of course since the next generation has come along, it’s been re-monikered “Papa’s French Toast.”) My dad’s secret ingredient, which set his french toast apart from that of mere mortal chefs, was yummy vanilla extract.

Vanilla extract aside, french toast is really only as good as the bread you make it with. Given its name, this recipe obviously calls for challah, but suggests that you can also use brioche. Well, we sort of backed into the most delectable french toast bread by sheer accident.

We were in the Hamptons for the weekend to celebrate David’s special birthday, and I decided to use the opportunity to do yet a third photo shoot for our 2009 holiday card. While I loved the concept we were trying to use ““ we had actually stumbled upon this cool rock in Napeague that had had “2009” painted on it ““ I wasn’t in love with any of the pics I had managed to take in August or September. I think they looked like ads for Ray-Ban. Here, lemme show you: 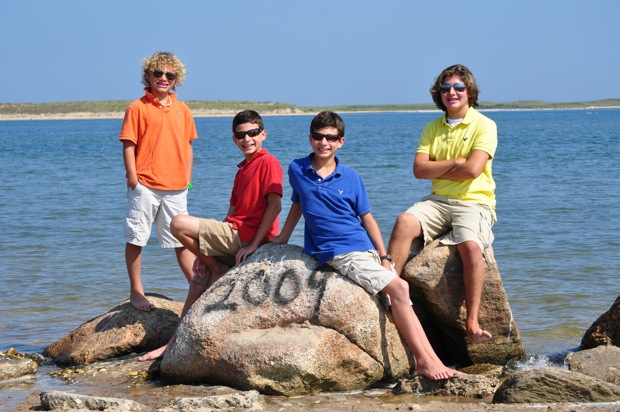 Anywho. We planned to head out again for a reshoot on Saturday, and after a yummy breakfast of flagels, the boys got showered, styled and ready to go. We were just about to get into the car, when the sky promptly opened up and it began drizzling. Which backed us up an hour. During which time I discovered that Matt had gone a bit overboard with curly styling products and his hair was a crunchy mess. So he washed it. Again. And we had to wait for it to dry. Again.

Two hours later than expected ““ a little grouchier, but all groomed, and with camera bag in hand ““ at last we headed out to scout locations. Shooting goes like this: Big Daddy drives us around, I yell “stop” when I see a cool background, my models pile out, get into formation, and I shoot. I know my time is up at each location when they start hitting each other and we’re all yelling on our way back to the car. It’s truly a delight.

We did this a few times at various locations, and then Big Daddy got the “bright” idea to wander over to Mecox Bay farm and see if we could check out the turkeys they raise for Thanksgiving. (Big Daddy, you see, is dreaming of a Hamptons Thanksgiving.) And then he proceeded to explore the surrounding area. Much to the chagrin of the models, who had clearly had enough. As had their photographer. We were all tired, grumpy and most of all, hungry. Thinking quickly, our driver started back Amagansett-way and pulled into the first food shop we came upon. It was our lucky day ““ within two miles we hit the jackpot: Loaves & Fishes. Since I was too apoplectic and weary to even get out of the car, Big Daddy went in to forage for good car snacks. He returned with a smorgasbord, including a challah, which the boys instantly ripped apart, and a spectacular cinnamon swirl brioche. He said he knew it was too much bread, but the owner, Sybelle, had said the leftovers would be perfect for french toast in the morning. Bingo! Breakfast idea!

If, as Ina says, this french toast recipe is “Sunday breakfast with the volume turned up,” making it with this sinful bread was like The Who’s 1976 concert at Charlton. The rich eggy batter included not only the secret vanilla, but honey and orange zest as well (Ben’s not a huge fan of orange flavor; hence, one fewer star from him). The cinnamon brioche soaked up the custard and toasted up sublimely in the pan. We dusted it with confectioner’s sugar and poured a little drizzle of good maple syrup, and I’m quite sure it would have been just as good had we not eaten it under the glistening autumn sunshine smiling upon our patio from the cloudless blue sky.

Sighhhhh…just daydreaming about which night this week I can make breakfast for dinner!