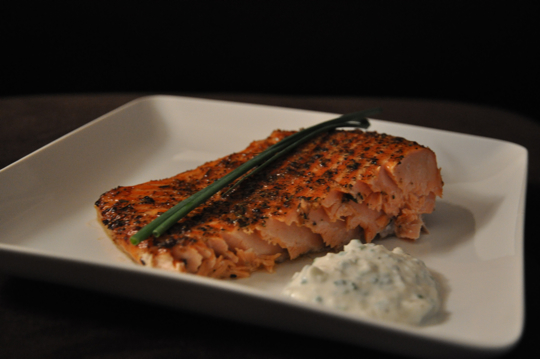 Yes, I am wayyyyyy behind. There are more than 30 dishes in my queue to write about, but this Cedar Planked Salmon with Lemon-Pepper Rub and Horseradish-Chive Sauce from last night was so scrumptious that it leapfrogged over everything else and jumped to the front of the line!
We’re those crazy variety of New Englanders who love to grill year-round, but there’s nothing more satisfying than firing up the coals on beautiful June weekends when it’s still relatively cool and there’s light in the sky until almost 9:00. And it’s even more fun to share those magical late-spring days kicking back with friends-laughing, gossiping and savoring the season. (When I told Matt we were having friends over for a cookout, he instead thought it was a “cook-off” and that my friend and I were going to have a culinary battle on the patio!)
I had spotted this recipe late last week while flipping through Fine Cooking (I’m one of the last few suckers who actually pages through a real paper magazine from time to time!), and I thought we’d try it out over the weekend. The results won unanimous raves, even from those of us who aren’t huge salmon fans.
The first trick is to start with the absolute freshest wild salmon. The thought of eating farm-raised fish is about as appealing as licking a dirty diaper; the list of gross stuff they pump into farm-raised fish includes things like dioxins, PCBs, antibiotics and pesticides to kill off sea lice. Eeeuuuwww!
As far as preparation, the lemon-pepper rub that tops the fish before grilling is simple and extraordinarily flavorful. But what really transforms the salmon is the smoky cedar taste that infuses the fish as it cooks slowly on the grill. Make sure to soak the cedar planks well, even overnight, as it’s the humid environment that makes the fish smokier and keeps it moist and succulent.
I have to admit I was dubious about the Horseradish-Chive Sauce. I had swapped out the crème fraîche for fat-free Greek-style yogurt, and tasting the sauce off a spoon was, frankly, a little yucky. I’m lying. It tasted a lot yucky. But it wound up being a deliciously cool and sharp contrast to the nicely smoked, peppery fish. At least two of us who don’t generally jump for joy over salmon said this was one of the best salmon dishes we’ve had, and the proof is that I’m off to munch on some leftovers as soon as I post this.
And what’s a more satisfying way to end a summer barbeque than 10 of us piling into the family room and to watch a classic episode of The Brady Bunch? It was especially funny to watch Marcia and Greg’s driving contest with two 16-year-olds who are about to get their driver’s licenses. Tell me they both won’t be picturing the DMV dude sitting in the passenger seat in his underwear: “You can start the car now, Miss Brady. Miss Brady, please start the car!”
Happy grilling. Would love to hear about some of your go-to summer cookout faves…please leave a comment!