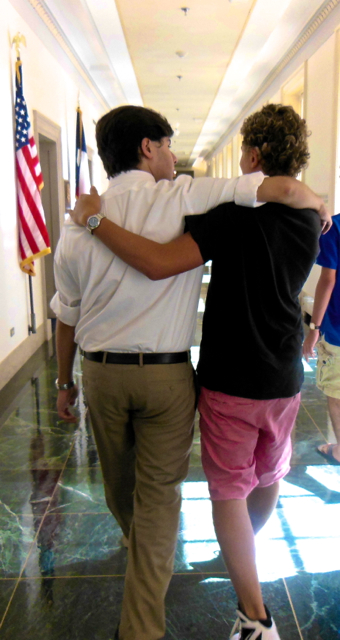 For the very first time, all four of my kids went off to different programs this summer: one went for a month to the same summer camp the gang has been going to for years; one attended a Spanish language immersion program at Swarthmore College in Pennsylvania where he communicated only in the target language for a month; one went to a rigorous program at the Wharton School at the University of Pennsylvania where he learned in-depth about the business of sports; and one spent five weeks in Washington, DC, where he took an undergraduate course at Georgetown in the mornings and did a Congressional internship on Capitol Hill in the afternoons, in the office of Rep. Rick Berg from the great state of North Dakota.

Whew! Four boys going in four different directions on four different schedules. For a few days we had one kid home, sometimes two kids overlapped, sometimes three—and yes, for nine days we were entirely kid-free. All told, it was seven whole weeks that we were not a complete family.

It was hard for the guys to coordinate communication while they were away. The one at camp could only write letters, as they don’t allow phone calls. The one studying Spanish had three specific phone times during the week, many of which conflicted with his twin bro’s class schedule. The other two were crazy-busy and would check in with quick calls or texts before they were running off to the next thing. What I found fascinating was that whenever I’d hear from one, he’d always want the run-down on the others. I loved being the official clearinghouse for “bro info.”

But the sweetest moments this summer? Watching the brothers reunite. It was one of the greatest joys of motherhood to witness their genuine glee and excitement when they reconnected in person. They’d run to greet each other. They’d hug tightly. They’d gaze at each other with admiration as they listened to each other’s experiences. They’d gush about how proud they were of each other and their accomplishments. And then they’d spend hours sharing photos, videos, anecdotes and private jokes. Warmed my heart more than I could ever imagine.

There’s no doubt that being apart strengthened their brotherhood bonds. It’s what you always hope and pray for as a mom, but you never know how it’s going to play out until they fly away for a bit. While they each had amazing individual experiences and grew more independent and self-reliant, they also discovered how much their brothers mean to them, and how much they love their family.

With the oldest starting his senior year, I treasure every moment we have together as a family. I’m a grateful mom that my boys were able to experience such life-changing adventures this summer. And I’m an especially grateful mom to have everyone back in the nest again.