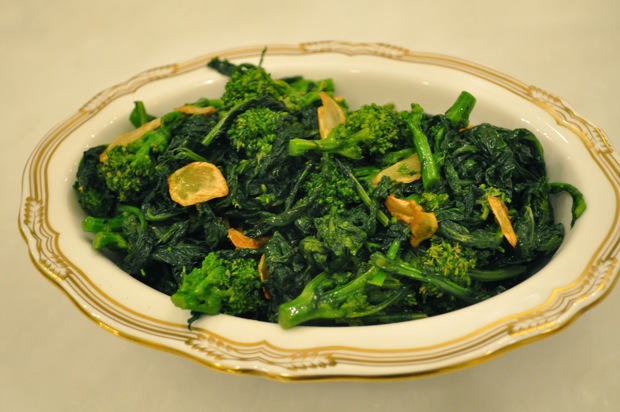 No, life isn’t all meatballs and cupcakes here at Chez Reiser. From time to time, we actually do eat from some of the other food groups!

Happily, we love us our veggies. Although when you’re a one-trick pony and all you do is toss veggies in olive oil, kosher salt and pepper and throw ’em in the oven to roast, it’s not really glamorous enough to blog about, agreed? Some of our perennial faves include asparagus, fennel, Yukon Golds, broccoli, cauliflower, butternut squash, onions, golden beets, eggplant, and our current passion ““ the one whose mere mention brought ardent supporters out of the woodwork on my Facebook page ““ brussels sprouts. You can grate or shave a little Reggiano parm on most of these yummy, caramelized veggies to finish ’em off, or of course, crumble some goat cheese and thyme sprigs on the beets. Couldn’t be any easier.

But somehow, bitter greens get a bad rap. They just don’t have the same cachet as root veggies. You can’t stick ’em in the oven and ““ presto! ““ have ’em come out done; you have to stand at the stove and sautè them. They don’t wind up velvety and caramelized; they turn out wilted. They’re not earthy and sweet; they’re leafy and acrid. Poor, woebegotten bitter greens.

I had never heard of rabe until I was 16 years old and I had a summer job as a bagger and carriage-gatherer at Stop & Shop in Wakefield (yes, at that booming mecca of retail, the Wakefield Mall!). I remember bagging for my pal John, and as he shoved a bunch of rabe down the belt, I asked what the heck it was. John, who was from a big Italian family, marveled at the deliciousness of “da rabes and garlic.” It took another 10 years for me to actually try them, and when I did, at Camille’s on the Hill, I was hooked.

I won’t lie. Broccoli rabe is a tough sell. Three out of the four boys wouldn’t even try it, and I think the fourth only tried it out of the glory of having helped cook it. I’m not convinced he liked the rabe three-and-a-half stars-worth as much as he liked his own cooking. And David commented, “These are good, but they’re bitter.” Um, yuh. Thanks, Captain Obvious.

It’s the garlic and olive oil as the supporting cast that makes rabe delish when it’s the star of the show. In this recipe, the little garlic chips add a flavorful crunch, and a fruity olive oil (as opposed to one that’s bitter and grassy) balances the bitterness and lends an opulent mouth feel. Of course broccoli rabe is a classic supporting player as well, especially in a dish like orecchiette (or some other pasta) with sausage or as part of an ensemble as a counterpoint to sharp provolone, sweet roasted red peppers, fruity olives, tangy marinated artichokes and savory artisan salumi on a top-notch antipasto platter. (Mmmmm! Throw in a warm loaf of crusty bread and a glass of Barolo and I’m in for lunch, baby!)

Be brave and give ’em a fair shot. See what you think. At the very least, you’ll get a healthy dose of Vitamins A and C, and that can’t be all bad.