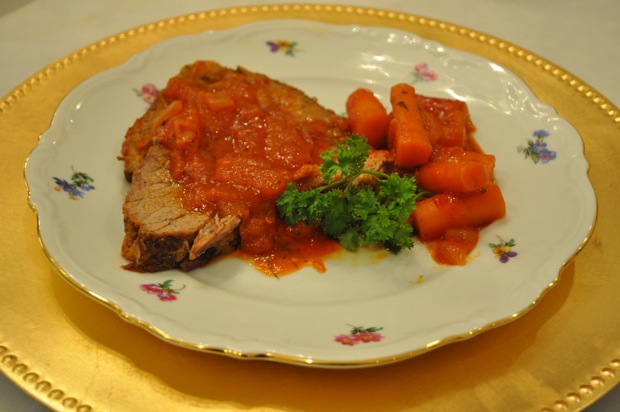 I grew up a good Jewish girl, mindlessly and obediently eating my grandmother’s brisket at Passover seders and other family dinners when it was the only choice, but far preferring chicken when there were two offerings. People would smack their lips and rave about the deliciousness of Nana’s preparation, but for me it was like French kissing a can of silly string. Doesn’t matter if you cook it in award-winning barbeque sauce, tomatoes and onions, ketchup and onion soup mix, or frankly, hot fudge — there are plenty of other things I’d rather put in my mouth.

Despite being a decent cook and an adventurous eater, I’m just not that into Jewish food. Call me a blaspheme. Not even sweet memories of family holidays past can dredge up nostalgic appeal for traditional Jewish dishes. And it’s not any particular preparation of the foods that makes them so unappetizing to me. People say, “Oh you should try my mother’s fill-in-the-blank.” (The list includes but is not limited to: chopped liver, tzimmes, gefilte fish, kasha varnishkes, brisket, knishes, herring, stuffed cabbage, kishke, kreplach, flanken soup, mandelbrot and kichel — basically, anything that sounds like you’re hockin’ a loogie when you pronounce it.) FEH to it all. Aside from good, raisin-less challah, my potato latkes, and chicken soup with matzoh balls, Jewish food is pretty much culinary heresy to my palate.

On the other hand, David loves brisket and all the other culinary chazerei he grew up with, so as a good wife, I’ve given it a shot over the years. I’ve tried Ina’s brisket recipe before, thinking if I was going to like any recipe, it would be this. We even tried upgrading the meat to prime brisket. In fact, this time, Big Daddy went overboard and bought a 13-pound prime hunk of beast from our local butcher for the six of us. Yes, THIRTEEN — I’ll give you a moment to digest that. Against his optimistic wishes, I halved it, and froze the unused portion. Now I’m hoping we lose power for four days again so we have to toss the spoiled contents of the freezer like we did a couple weeks ago. (Did I really just say that?) I’ll admit this recipe was easy and made a tasty sauce. The meat was cooked perfectly. It’s just that I felt the need to do my “see-food” demonstration for my charmed children: put a piece in my mouth, chew it up, open my mouth. See? Food! Yes, I am eternally infantile, and proud of it thankyouverymuch.

So, listen, here’s the deal. If you adore brisket and you find yourself in the Westport area in the next day or so, stop over and for the price of a giant hug, I’ll make you a nice care package from the four pounds of leftovers in my fridge. Such a bargain! And one lucky winner will receive a delightful prime brisket iceberg so you, too, can make the brisket of your dreams.

Preheat the oven to 350 degrees F.

Place the brisket in a heavy roasting pan. In a small bowl, combine the salt, pepper, garlic, and oregano. Rub the mixture on the brisket. Pile the carrots, celery, onions, and bay leaves on the brisket and pour in enough tomato juice to come about 3/4 of the way up the meat and vegetables. Cover the top of the pan with 2 sheets of parchment paper, then with aluminum foil. (The tomato juice will react unpleasantly with the aluminum foil if they touch.)

Bake for 3½ hours, or until the meat is tender. Remove the meat from the pan and keep it warm. Place the pan on 2 burners and boil the vegetables and sauce over medium heat for another 30 minutes, or until the sauce is thickened.

To serve, slice the meat across the grain. Serve with the vegetables.