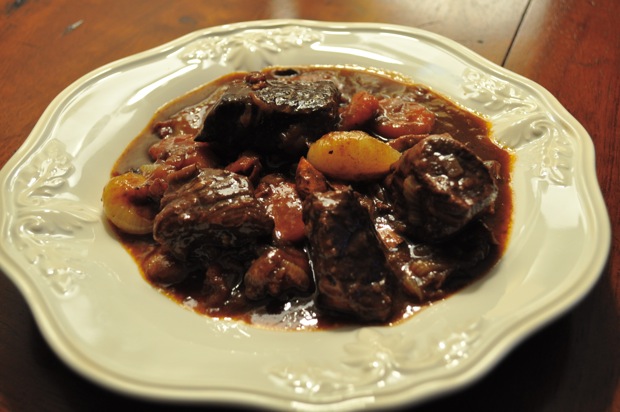 It won’t be terribly surprising that every time I or one of my sous chefs was pronouncing the name of this dish, we channeled Meryl Streep’s uncanny portrayal of Julia Child. And I sheepishly admit it’s fairly impossible not to hear Julia’s resonant voice guiding you through every step of this magnificent classic recipe!

This was our first foray into “Childhood” ““ that is, the gastronomic stratosphere to which Julia Child brought us. Though I was inspired to do this cooking blog by the movie Julie & Julia last summer, I have intentionally resisted the clichè of cooking from the tome that put the brilliant Julia indelibly on the culinary landscape and the dreadful Julie on the silver screen. But when dear friends generously offered to share four treasured bottles of Bordeaux ““ including an ’82 Lafite ““ I knew I had to prepare a meal that would befit the extraordinary specialness of the wines. I finally broke down and ordered a copy of Mastering the Art of French Cooking for each house, and out at the beach last Sunday the twins and I embarked on our debut Boeuf Bourguignon. 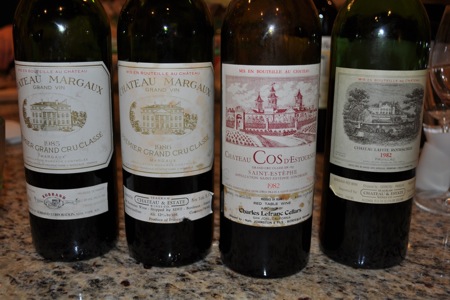 We followed the simple, multi-step directions to the letter ““ with the sole exception that I couldn’t pass up exquisite chanterelles I found at the market, so I used them instead of the button mushrooms. I was able to get prime rump roast that the butcher at Citarella cubed for me, as well as beautiful slab bacon for lardons. Jake and Zack were exemplary sous chefs ““ precise, attentive and dedicated. Together, we jumped around the cookbook, following Julia’s references to braise the onions and sautè the mushrooms, and then brought everything together at the end of the Boeuf recipe. It was like magic! Every single component turned out perfectly, and the result was exponentially more scrumptious than the sum of its parts. The dish was unctuous, succulent, tender, complex ““ and even more lustily enhanced by the truffle-nuanced glass of Lafite that I would’ve swum in if I could’ve. I was pretty much reduced to a puddle of ecstasy.

Based on the gushing reviews, I will likely make Boeuf Bourguignon dozens more times. I just don’t think it will ever to live up to the memory of this meal, laughing heartily with favorite friends and sipping superb wine on a rainy winter night in Amagansett. And could it be more poetic that Meryl Streep picked up a Best Actress Golden Globe for playing Julia the very same evening?