Be the Reason Someone Smiles Today 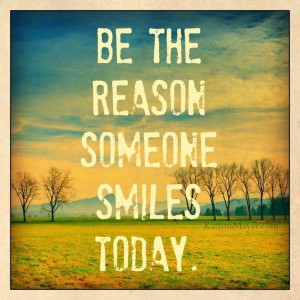 I was lucky enough to get to chat by phone yesterday afternoon with my oldest son, who’s a super-busy college freshman. He mentioned that he had gone up to his History professor after class yesterday to tell her how much he looks forward to her fascinating lectures, sharing with her that they’re genuinely a highlight of his week. She thanked him graciously and they each went on their way.

But the story doesn’t end there. A short time later, he forwarded me a really thoughtful email she had taken the time to write, thanking him again for his kind words and telling him that he had provided a bright spot on a day when she could really use one. She wrote: “So often people do things for others that make a difference and don’t know it. I just wanted you to know that you did, and to say I appreciate it.”

LOVE that! It inspires me to want to make a positive difference in someone’s day, as well as to make a more meaningful effort to thank people who brighten my day.