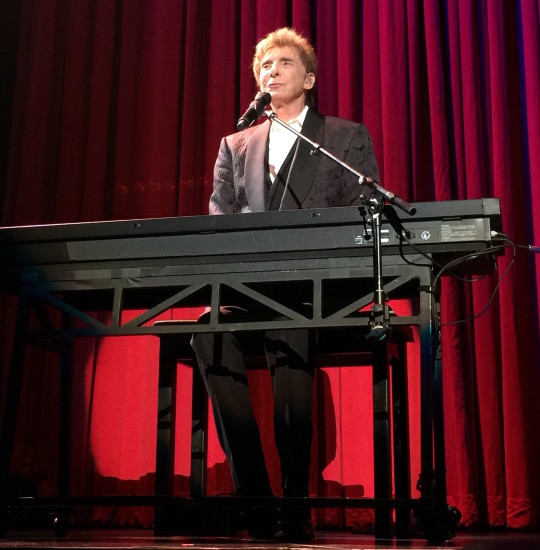 It was a treat for me to see Barry for the twenty-somethingeth time last night at the Barclays Center in his hometown of Brooklyn, on the last stop of his “One Last Time” tour.

“The last time I sang in Brooklyn was at my bar mitzvah,” he quipped.

The show coincided with Barry 72nd birthday, and his backup singers wheeled in a cake at the end while the crowd sang to him. He joked that at 72, the best his grandfather could do was bring up phlegm, as he thanked the crowd for coming to see him do what he loves.“I hope Grandpa would be proud of his grandson,” he reflected.

Yes, hip issues plague him so he hobbles around the stage rather than running around thrusting his crotchal-area at shrieking ladies. Yes, he’s been nipped and tucked into a virtually unrecognizable plastic version of his young self. No, he can’t hit the high register quite like he used to. But he still sounds damn good singing the hits like “Looks Like We Made It,” “This One’s For You” and “Mandy.” He can still hold the “meeeeee” in “Weekend In New England” almost as long as it takes Austin Powers to pee in the morning. He still plays a mean piano. And he still drives the swooning, aging women wild. Oh, and the cute, youngish gay guys.

As soon as I hear those three exhilarating horn blasts at the start of a concert — the first thrilling notes of “I Write the Songs” — and there’s backlit Barry, silhouetted in his signature pose emerging from the darkness, I’m a 12-year-old girl again. Giddy. Carefree. Tickled pink. And filled with tremendous emotion. Doesn’t matter how much I roll my eyes before the show, how tired I am, what kind of mood I’m in. It’s always a nostalgic call to happy. My jubilant grin lasts til the very last note, Barry belting with his head tipped back, arm outstretched triumphantly…aaaaaand fade to black. Then poof!  It’s back to the real world and the responsibilities and stresses of an almost 50 year old.