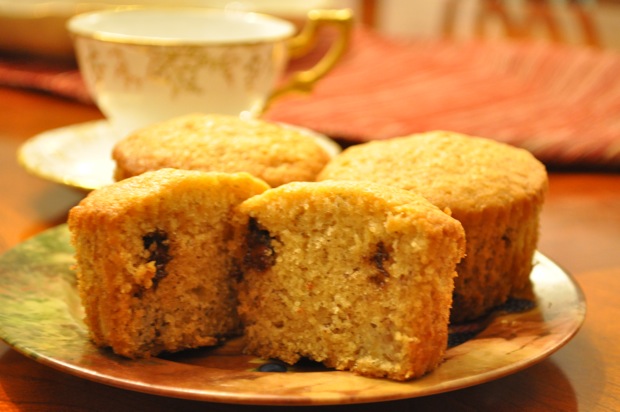 Once upon a time there were six blissful, yellow bananas attached at the stem. After an active life of travel with family and friends, they moved to a kitchen island in the home of four noisy boys. At first the bananas enjoyed their relaxation, but after a while they grew bored. Days went by, and the boys ignored the bananas. The bananas became lonely and sad. The sadder they got, the browner they got.

One rainy day while the noisy boys were at school, the mom noticed the very sad, very brown bananas. “Cheer up,” she encouraged. “I have a sweet job for three of you today. If all goes well, you will feel useful and loved.” She rifled through a cookbook and came across a recipe she had used several years before for Banana Crunch Muffins. As the mom searched through the pantry, however, she found that she was missing a few ingredients for the “crunch” part of the muffins, namely sweetened shredded coconut and granola. And because it was raining, she didn’t feel like going to the store. So she quickly remembered a cooking tip her sister had once invented: whenever you’re out of an ingredient, substitute with chocolate chips! While this doesn’t work when you’re making, say, chicken soup and you’re out of noodles, the mom thought it was inspired advice for banana muffins. And thus, Rainy Day Banana Muffins were born.

Not only did the mom substitute chocolate chips, but she decided to substitute brown sugar for half of the white sugar measurement, and increased the vanilla extract. The result was the moistest, most sinful muffin she had ever tasted — almost like caramelized banana cake with walnuts and chocolate chips. Apparently the noisy boys heartily agreed, because the next morning when the mom came downstairs, there were only six muffins left from the 30 she had baked! (She later found out that one of the noisy boys had absconded with 10 muffins to share with his broadcasting mates on the school’s morning TV show.)

Later that day, the mom winked at the three remaining brown bananas. They winked knowingly back at her. In a flash, the mom whipped up 30 more Rainy Day Banana Muffins for the noisy boys. The bananas were so gratified to have made the noisy boys cheer with delight. The noisy boys were grateful to the bananas, and to their mom. And everyone lived happily ever after. The End.