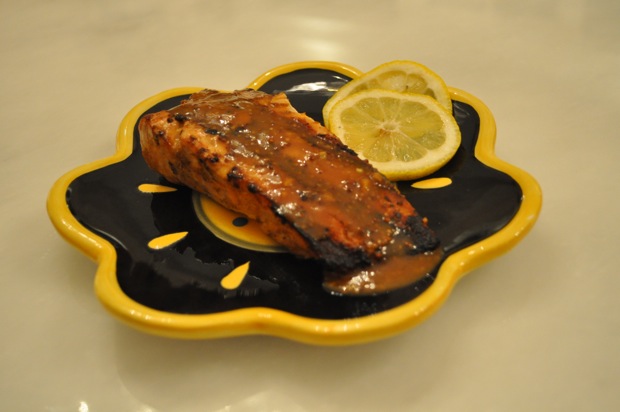 When it comes to salmon and most oily fish, I think simple is better. I’m a big fan of grilled fish without a lot of embellishment, and I much prefer savory flavors to sweet with fish, although my mind may be changed next week when I am in the brilliant hands of Eric Ripert and company at the ne plus ultra of fancy fish restaurants, Le Bernardin.

Although I don’t make salmon as often as I should, this recipe is right up my alley. The marinade-slash-finishing sauce has just four ingredients: garlic, mustard, soy sauce and olive oil, which makes for a zesty albeit slightly too salty kick. We picked up a beautiful piece of salmon, and before cutting it into portions, as the recipe specifies, David removed all trace of scales so he could dazzle us with mouthwatering crispy skin. He put some of the marinade on for 10 minutes before grilling, and then, disaster struck. Despite the fact that he had twice oiled the grates on this poor stepchild of a grill here in Connecticut, the magnificent skin stuck to the surface and the Grillmaster was less than thrilled. Quite pissed, to be more accurate. He cooked the pink flesh per the directions, though, and salvaged what he could of the skin by scraping the shriveled scraps off the grilling surface.

The recipe specifies a short cooking time over medium-high heat, and then, like with beef, you let the fish rest for a few minutes to finish cooking before spooning some of the remaining sauce on top.

I have to say that this was among the most silky, supple pieces of salmon I’ve ever eaten, and I’m sure it was a combination of it being a great, fresh piece of fish plus the cooking technique. The consensus on the sauce was that it was a touch too salty, but it didn’t ruin the dish. Maybe a squeeze of lemon over the whole thing would have added a some needed bright acidity.

Coincidentally, my sister-a once-a-week salmon cook-recently made the same recipe with different results. She found that the fish was inedibly undercooked using these directions, and had to return it to the grill for another five or six minutes while the rest of her dinner was getting cold (although she conceded that her grill might not have been hot enough in the first place). She wasn’t in love with the sauce, and doesn’t think she’ll make this again. I, on the other hand, will probably use this cooking technique again, but will likely try variations to the sauce until I figure out something that complements the lovely moist fish.