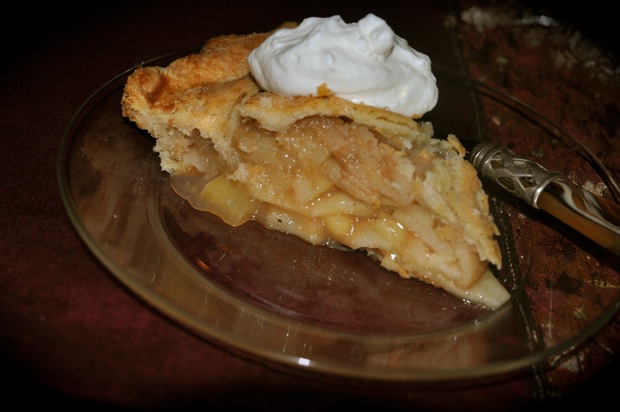 This is likely to set off shockwaves among my foodie peeps, but believe it or not, I don’t have an apple pie recipe in my repertoire. I know-heretic, isn’t it? And the reason why may even be more surprising: I basically don’t like apple pie. Crazy. Warped, even. What’s more bizarre is that my sister and I were both born of apple-pie-loving parents, and neither of us likes it. (The most elusive genetic mystery, however, may be how our parents-two coffee-drinking folks-managed to produce THREE non-coffee-drinking offspring. Anywho.)

Ironically, I wound up marrying a guy who prefers pies to cakes, and I can crank out delectable creations filled with things like blueberries, chocolate cream, or pumpkin. But I makey what I likey, and apple pie ain’t high on the list. I remember picking apples as a youngster on crisp fall Sundays, and my mom peeling and cutting them into a heaping pile that yielded beautiful, bountiful pies. The house was fragrant with cinnamon-y goodness (that you can now buy in a can of room spray!), and the day made for lifelong “autumn in New England” memories. When the pie would come out of the oven and cool a bit, I’d eagerly take a slice-and after one mouthful of mushy apples, I’d leave them for dead and gobble up the (likely storebought) crust. What can I say-sometimes there’s no accounting for taste when you’re 11 years old.

I’m pretty sure I’ve made an apple pie or two in my time, but always, I’m certain, begrudgingly. And then yesterday came the day of reckoning.

I had the Food Network on TV while I was getting dressed, and chef Alex Guarnaschelli (who, bee-tee-dubs, looks exceedingly better when lighted and styled for her own show than she does on Chopped) was making a cranberry-pear pie. At once I knew that the stars were aligned for me to do some baking, and the pie instantly inspired me. Yummy as I thought it sounded, I wasn’t sure I could sell cranberries and pears to my gang, so I summoned up the motivation to do an apple pie. But if I was going to do apple pie, I was going to do it on my terms. Not having a go-to recipe, I hit the web-starting with the crust. Forget about the benefits of using shortening. Yeah, yeah, flaky, shmaky-I wanted an all-butter recipe. Next, I knew I wanted to use mostly Granny Smith apples. Tart, crunchy, and firm enough to bake with. And finally, I didn’t want to use corn starch as a thickener. Why? I don’t know, some completely irrational opinion that corn starch is cheating while flour isn’t. Like I said, totally irrational.

I checked out all the usual online suspects, and then ventured over to Saveur. (I have to say that since the lamentable demise of Gourmet last year, Saveur has been looking pretty groovy.) And lo and behold, they had exactly the recipe I had been dreaming of. All-butter crust, Granny Smiths, and flour instead of corn starch. The recipe also included cider vinegar rather than ubiquitous lemon juice, and I thought that sounded interesting.

So I headed to our brand-spankin’-new Fairway Market in Stamford, and came upon an apple extravaganza! In addition to the Grannies, the recipe included a couple of Golden Delicious apples, but the promotional signs at Fairway persuaded me to pick up some Braeburns instead. I went home and found the crust to be a piece o’cake to make (no pun intended). I sliced the apples up thinly as instructed (no chunks for me, thankyouverymuch), and mixed them with all the other lovely ingredients, including a swoonful extra hit of fresh-grated nutmeg. (I have in my pantry several lifetime supplies of whole nutmeg, thanks to a trip to Sid Wainer about 5 years ago-swing by if you want to add some spice to your life!)

Like any happy Sunday afternoon cook, I was enjoying a nice glass (or two) of wine while baking, and I’m certain it was the wine that helped me discover a heralded secret ingredient to further enhance the pie filling. In front of my work space on the island just happened to be a bulk container of crystallized ginger slices. “Why not?” I thought, as I diced up about 1/3 cup of the yumminess and dumped it into the bowl of apples.

Well, if I do say so myself, it was quite the inspired oeno-epiphany! I followed the baking instructions to a tee, and out of the oven (another glass of wine later) came a gorgeous pie. The crust was perfect (the whole thing looked MUCH more appealing than the picture on the Saveur website does), and the filling was tart, sweet, and warmly spiced, with that little je ne sais quoi that my kids finally discerned after multiple rounds of guessing.

And so, I have finally acquired an apple pie recipe for my collection. I’m admittedly still not the world’s biggest apple pie fan, but at least on my terms, I can put out a product that I’m not only proud of, but that I’ll eat as well.