AN OPEN BOOK: On the Road with Phil Donahue & Baba Wawa 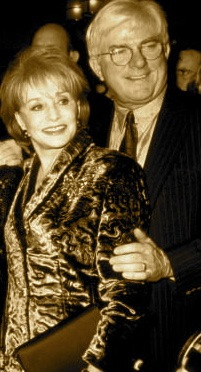 By the time I sink my teeth into whatever Chef Kreuther is making for dinner at The Modern tonight, we will have interviewed seven more people since my last post. (In the spirit of full disclosure, one interview was with two people at once, and another was actually a follow-up with someone we had spoken to a few weeks before. But still.) A lot of asking and a lot of listening to some pretty amazing stuff. I realized during one interview that the guy we were talking to was the third “third brother” we had interviewed – meaning he had two older brothers, as had two previous guys we interviewed. We know we have at least one more third brother on our list…pretty weird to think about the birth order coincidence.

We’ve gotten the interview process pretty much down to a science. A few days before our meeting or conference call, David and I develop guiding questions and send them to the person we’re going to speak to. The more interviews we do and the more profiles I write, the easier it has become to develop questions. I want to be able to make each profile a relevant and compelling story, so we’ve learned to keep the questions fairly focused but open-ended. We find that five good questions will result in an interview of an hour or so. David leads the interviews based on the questions we’ve prepared, while I make notes and record the sessions on that cool pen I mentioned a while back. I’m fairly quiet during the interviews, always thinking about how I will craft the profile based on what the person is saying. And I’ll admit I’m also quiet because I hate to hear my own voice on the recording! I then upload and convert the audio into MP3 format, transmit it to our transcription service, and within about two days, I get the written transcript back.

The interviews are pure joy and have been an honor for us to do so far. Many of our subjects have really pondered the advance questions and actually made notes about points they want to remember to make. The conversations are more revealing and fascinating than we had even imagined, and we had our first Barbara Walters moment yesterday when the person we were interviewing welled up and wept while sharing a bittersweet personal memory. I can’t describe how satisfying it feels to give people the opportunity to talk positively about themselves, and for us to leave on a monumental high, having learned so much. The interviews alone are eye-opening and energizing experiences. Being able to craft written pieces from them is icing on the cake.

We heard from the publisher this week, asking about our thoughts on cover design, and we shared our visions and concepts. They were quite receptive to our ideas, and we’ll start working with them soon to get that going.

I’ll be hunkering down over the next couple of weeks so I can catch up on my writing, meaning that I need to put the brakes on Phil Donahue, who adores the interviews. He’s improved dramatically, learning to rein himself in and curb the tangential shmoozing, since it gets the interview off track and winds up giving me too much extraneous stuff to have to sift through when I’m writing. I’m also trying to teach him to restrain himself from adding his suggestive little innuendoes, since the transcriber has to listen to them and write them all – word-for-dirty-word!

We’re definitely in the groove now, and most of the time we make fantastic partners for this project.