Ain’t No Doubt About It, We Were Doubly Blessed 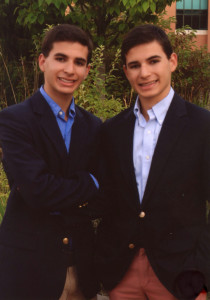 Back in the fall of 1995, we were adjusting to our brand-new life as parents of a beautiful seven month old baby boy. We hadn’t exactly been intending to grow our family at that point, so it came as a complete surprise when I found out I was expecting again. It was an even bigger surprise to find out several weeks later that I was carrying twins. But there was one more surprise in store for us all…and we wouldn’t find out for 17 years!

Our double blessings, two delicious boys, arrived in May of 1996—four weeks early—and weighed in on either side of five pounds. When I went for my postpartum follow-up visit a few weeks later, the doctor mentioned that protocol placenta testing done by the hospital estimated a 70-80% probability that the babies were fraternal. It didn’t matter to us; we were simply overjoyed to welcome two more healthy little guys into our family.

(As an aside, one baby suffered from a minor respiratory issue at birth and had to remain in the hospital for five days after his brother was discharged. When we reunited them in their crib at home, they actually reached out for each other and we were able to capture the precious moment. I wouldn’t have believed it if I hadn’t seen it happen! It was pretty cool.) 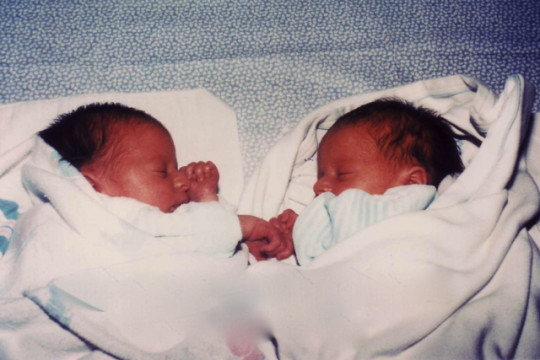 Based on the hospital’s simple testing, we’ve gone all these years with the assumption that they are fraternal twins—meaning that there were two individual eggs fertilized by two different sperm, creating two genetically distinct human beings. When fascinated friends and strangers have asked about it—and they almost always do because people have perpetually thought the guys look a lot alike—we’ve explained that they’re likely fraternal. It always sounded plausible to me, since as their mom, I’ve always seen them as completely individual and have rarely given it a second thought.

Throughout the years, though, there have admittedly been interesting little “twin coincidences.” I remember their kindergarten teacher telling me that they had been doing an assignment on opposite sides of the classroom with different groups of kids and she discovered they had created exactly the same thing. I will often text them individually and they’ll send back verbatim responses, down to spelling and punctuation. And one night I happened to glance over at them while they were engrossed in a TV show and this is what I saw: 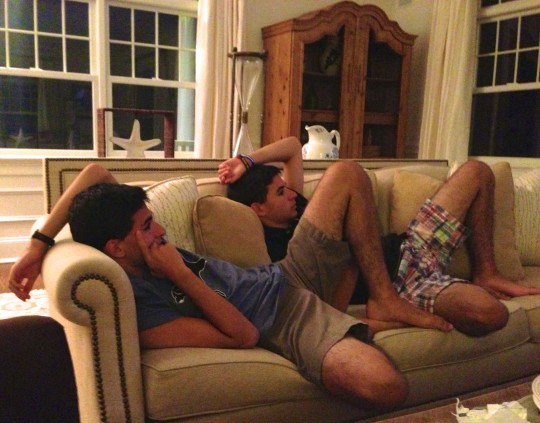 Last year, however, one of them was interested enough in the apparent deeper connection between twins than singleton siblings to do a research paper about it for school. In the process, he learned there’s such a thing as semi-identical twins. This is the rare result of one egg that mysteriously splits and subsequently each half is fertilized by a different sperm. The guys became intrigued with this possibility and asked if they could find out if they were semi-identical.

We tracked down a facility that performs this specific test, and shortly after we sent a request for the test kit, we were contacted by someone from the lab. She wanted to verify that we understood what semi-identical twins were, and that we actually wanted to have that test. As she explained, “Usually, it’s because a lady has had relations with one guy at night and then she has more fun the next morning with another guy, so there could be two baby-daddies!”

No, we explained, we were pretty well sure there was only one baby-daddy in this case. We were just curious as to whether they were actually fraternal, or whether they had been conceived with one egg and two sperm.

Yesterday, the results arrived while the guys were at school. And lo and behold, it turns out our boys are not fraternal twins. Nor are they semi-identical. They’re IDENTICAL twins! One egg was fertilized by one sperm, it miraculously split, and the two brothers share the exact DNA code. We were shocked and tickled!

When they got home from school, I handed each a printout of his DNA code on four different panels, and asked one to read out loud what it said on his Panel #1. The other one noticed that his Panel #1 said the same thing. Then I asked the other guy to read Panel #2. By the third panel, the two of them had curious little grins, and asked, “Are we identical?” When they finished, they had a pretty good idea that that was indeed the case. I confirmed the results for them (the report says “Monozygotic Twin” for each), and they both burst into shocked and amused peals of laughter. They had expected to find out that they were fraternal twins, as they had believed all along. This completely blew their minds.

Quite a surprise for all of us to discover 17 years later!

Does it change anything? Well, now they need to come up with a new insult line. On the infrequent occasion when they get irked with one another, they’ll blurt out, “You’re ugly!” Guess that’s not exactly much of an insult anymore when it means that you’re ugly too!