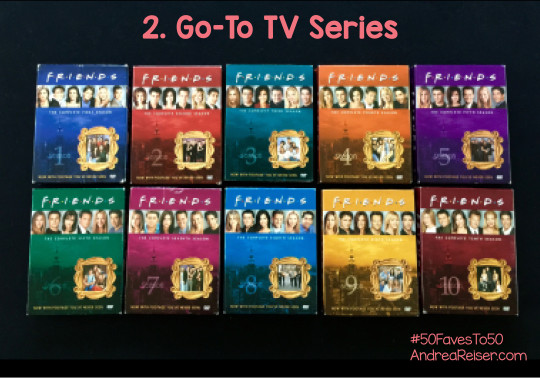 My name is Andrea and I am a sitcom junkie. Give me a playlist of I Love Lucy, The Dick Van Dyke Show, The Mary Tyler Moore Show, The Bob Newhart Show, Bewitched, The Brady Bunch, Cheers, Taxi, The Cosby Show, Seinfeld, Will & Grace, Frasier, The King of Queens, Everybody Loves Raymond, Still Standing, Mad About You, Yes Dear, Arrested Development, Curb Your Enthusiasm, The Big Bang Theory, The Jeffersons, 30 Rock, M*A*S*H, Happy Days, NewsRadio — I could go on and on — and I’m one happy camper.

But when I’m up in the middle of the night and can’t sleep or I throw on the TV while I’m ironing or folding clothes, my go-to is Friends. When the series debuted in 1994, I was the same age as the cast, yet my lifestyle was totally different — I was a married suburbanite, pregnant with baby #1. (For the record, my Ben was born 3 months before Ross Geller’s Ben!) Most weeks, my husband traveled for business from Monday morning til late Thursday night, and for me, settling in on Thursdays at 8 for Must-See TV signaled his imminent return. Every Wednesday, my fellow playgroup moms and I would dish about Ross and Rachel, laugh about Smelly Cat, ask “How you doin’?” and admire Jennifer Aniston’s fabulous hair (yes, I had “The Rachel” at one point) while our babies dozed happily in their little carseats. It was a way for us to catch a glimpse of what we might have been doing — albeit much less humorously, glamorously and extravagantly — were we not pushing strollers, changing diapers and settling into marriages.

For me, that was a happy and exciting time, and watching Friends always brings me back there. It’s fun comfort food, and the gang is good company when I’m lying awake at 3 am or drudgingly doing laundry — which if you think about it is pretty much the definition of “friends.” Re-watching the series so many times has also given me a greater appreciation for Joey and Phoebe, who were the characters I least related to on first run. And the coolest thing is that my kids, who were toddlers when Monica and Chandler got married, are all fans of the show now too, freely tossing around Friends references as family in-jokes.

The only thing that has mystified me over all these years is why the heck someone thought it was a good idea to give Ross a pet monkey!

My next birthday is the big 5-0, and rather than approaching it with dread, I decided to have some fun by doing a weekly countdown revisiting some of my favorite memories and things from the past 49+ years. #50FavesTo50