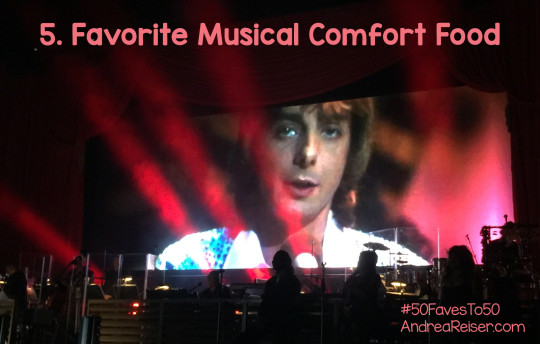 He writes the songs you love to hate, hate to know, and make you run for a barf bag. He’s the king of schmaltz and over-orchestrated key changes. His Velveeta factor is off the charts. He’s a rather — ummm — shall we say “ironic” choice for a sex god. But uncool as it may be, he makes me smile big. He brings me back to the happy, simple place of life as a 12-year-old girl. He was my first — and as of this moment my most recent — concert.

C’mon, be honest. You have a guilty musical pleasure too. A weak spot for some dork whose songs and voice give people hives, but who reliably soothes you like musical comfort food. You probably don’t listen often, yet you know their music is there for you in some cryptically-named playlist when you need a giant musical hug. They can dependably deliver on demand any feeling or emotion you desire. Need a good cry? Gotcha covered. Need to sing at the top of your lungs? Done. Need to release your inner sap? Check. Need to cheer up? Score. (In fact, years ago, my sister and I spontaneously choreographed a dopey lip-synched dance to Manilow’s “Daybreak” to brighten up a blue friend who was going through a breakup. I can still picture her laugh-crying at our “…let it shine-shine-shine all around the world” moves. Classic.)

For me, Barry’s that guy. I’ll never forget my first show, sitting in nosebleed seats at the Providence Civic Center on June 23, 1978. Barry wore a white bell-bottomed jumpsuit. I don’t remember what I wore. I still have the program from that first show, and it’s among my most treasured possessions. My boys have flipped through it, nauseated by the beefcake shots of a young dude with a huge schnozz in half-buttoned shirts with enormous collars.

Full disclosure: I’ve never had throw-your-panties-on-the-stage feelings for him (and anyway, that would’ve been revolting at age 12). But my Glen Hills Elementary School girlfriends and I knew all the words to every single one of his songs back in the day. This was when the awesome, triple-platinum “Even Now” album came out, and its four smash singles were wall-to-wall on the radio. You know you know some of those songs. In addition to the beautiful title cut, there was another lifelong favorite, “Somewhere in the Night,” plus “Can’t Smile Without You” (“I feeeeeel saaaad when you’rrrrre saaad…”) and of course, the legendary Lola. She was a showgirl. And admit it: you could tell me what was in her hair if I promised you a cronut.

So it was a treat for me to see Barry for the twenty-somethingeth time this past week at the Barclays Center in his hometown of Brooklyn, on the last stop of his “One Last Time” tour.

“The last time I sang in Brooklyn was at my bar mitzvah,” he quipped.

The show coincided with Barry 72nd birthday, and his backup singers wheeled in a cake at the end while the crowd sang to him. He joked that at 72, the best his grandfather could do was bring up phlegm, as he thanked the crowd for coming to see him do what he loves.“I hope Grandpa would be proud of his grandson,” he reflected.

Yes, hip issues plague him so he hobbles around the stage rather than running around thrusting his crotchal-area at shrieking ladies. Yes, he’s been nipped and tucked into a virtually unrecognizable plastic version of his young self. No, he can’t hit the high register quite like he used to. But he still sounds damn good singing the hits like “Looks Like We Made It,” “This One’s For You” and “Mandy.” He can still hold the “meeeeee” in “Weekend In New England” almost as long as it takes Austin Powers to pee in the morning. He still plays a mean piano. And he still drives the swooning, aging women wild. Oh, and the cute, youngish gay guys.

I took a Barry break for most of the 80s, but succumbed again big-time a decade later. I saw him at Great Woods. In Vegas. At Radio City. Foxwoods. Harborlights. The Fleet Center. Mohegan Sun. During this time, I was lucky enough to marry a guy who at first joined me begrudgingly at shows (now that’s love!), but who then, like almost all husbands in all of Barry’s audiences, accidentally developed some odd fondness for the guy. We’d bring friends with us to shows, and much as they may’ve tried, they all left feeling goofy-happy. One of my friends still tells the sweet story of how joyful it was for him to watch me watch Barry.

I was even part of an online Barry discussion group for a few years. I began to appreciate the albums that I had missed. Did you know he created an original jazz album that was recorded entirely live in one take? Or that he collaborated on a stage musical titled “Harmony” about a real-life singing group in Nazi Germany that was destined for Broadway but fell short of funding? (Somewhere I have the script and a bootleg of the music.) I learned the B-sides of his records so well that I can’t distinguish between hits and non-hits anymore. They’re all just so familiar to me.

Yet even after lo these many years, as soon as I hear those three exhilarating horn blasts at the start of a concert — the first thrilling notes of “I Write the Songs” — and there’s backlit Barry, silhouetted in his signature pose emerging from the darkness, I’m a 12-year-old girl again. Giddy. Carefree. Tickled pink. And filled with tremendous emotion. Doesn’t matter how much I roll my eyes before the show, how tired I am, what kind of mood I’m in. It’s always a nostalgic call to happy. My jubilant grin lasts til the very last note, Barry belting with his head tipped back, arm outstretched triumphantly…aaaaaand fade to black. Then poof!  It’s back to the real world and the responsibilities and stresses of an almost 50 year old.

My next birthday is the big 5-0, and rather than approaching it with dread, I decided to have some fun by doing a weekly countdown revisiting some of my favorite memories and things from the past 49+ years. #50FavesTo50