I joined Twitter in the summer of 2010, and even though I’m a college-educated, published author, active blogger, Facebooker extraordinaire, and mom of four teens, I’m still thoroughly perplexed about how to use Twitter efficiently and appropriately. You see, I’m an oldest child—a rule-follower by nature—and a little shy to boot. And before I leap onto a new scene, I like to 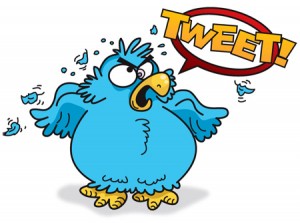 have a heads-up about the accepted etiquette so I don’t look like a complete horse’s ass (another consequence, no doubt, of being an oldest child). Know if I should be wearing jeans or a cocktail dress. Whether I should bring a hostess gift or make a charitable donation. Which fork to use for the salad.

21. SHARING OTHER PEOPLE’S STUFF VS. SELF-PROMOTION

– 70% of your tweets should be promoting other people’s stuff

So what are your “rules” for Twitter? Feel free to enlighten me as to the definitive proper way to do things. (Yeah, that oughta clear things right up!)